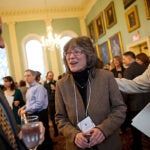 Michael Tinkham, Rumford Professor of Physics and Gordon McKay Professor of Applied Physics in the Physics Department and the School of Engineering and Applied Sciences, Emeritus, who was internationally known for his contributions to condensed matter physics, in particular superconductivity, died in Portland, Oregon, on November 4, 2010, of complications following a stroke.  He was 82 years old.

Mike was an experimental physicist with a gift for theory and a nose for important challenging problems.  After graduating from Ripon College in Wisconsin in 1951 with a bachelor’s degree in physics, he proceeded to the Massachusetts Institute of Technology, where he received his master’s degree and Ph.D. in just three years.  His thesis, “Theory of the Fine Structure of the Molecular Oxygen Ground State with an Experimental Study of its Microwave Paramagnetic Spectrum,” was published in 1955.  He changed his interests from gaseous magnetic oxygen to the understanding of properties in solids with a classic study of magnetic properties of transition metal ions in a diamagnetic lattice as a postdoctoral fellow at the Clarendon Laboratory in Oxford University from 1954-1955.  Mike then moved to the University of California in Berkeley as a postdoctoral fellow in 1955, and joined the faculty there in 1957.

At Berkeley Mike wrote his first book, Group Theory and Quantum Mechanics (1964).  His research was predominantly in superconductivity and magnetism.  This was an era when the understanding of superconductivity in metals was just emerging after many decades of study and lack of understanding.  Together with Rolf Glover III, a fellow postdoc, he set up a laboratory and measured the absorption/transmission of far infrared light passing through thin superconducting films. The remarkable result was that more light passed through the films in the superconducting state than in the higher temperature normal metal phase.  The far IR measurements as a function of frequency showed the existence of the superconducting energy gap.  These observations preceded the just-developing Bardeen-Cooper-Schriefer (BCS) theory of superconductivity and were key evidence in support of the theory.  His double-pronged research group in superconductivity and magnetism created an exciting environment, and Berkeley was an important stop for travelling scientists to visit Mike and his group and observe the latest findings.  In 1974 Mike was awarded the Oliver Buckley Prize of the American Physical Society for outstanding theoretical or experimental contributions to condensed matter physics based upon that work.

In 1966 Mike accepted an offer from the Physics Department at Harvard University, where he spent the rest of his career.  Superconductivity continued as the main focus of his research.  His deep understanding of superconductivity led him to write his second book, Introduction to Superconductivity (1975), which clearly elucidated the subtle mysteries of the subject and has become a classic in the field.  In the early seventies, together with his postdocs and students, he made important advances in understanding the effect of thermal fluctuations on broadening the transition between superconducting and normal states.  With his deep understanding of the subtle theoretical underpinnings of superconductivity, he led a research activity to study many properties of the superconducting state.  With members of his group he applied those ideas to phase-slip centers, current flow across the superconductor-normal interface, and the subharmonic energy-gap structure in superconducting metallic weak links.  Mike moved with the times.  At Harvard he led in the development of the first central labs for producing materials on a nanoscopic level.  He and his group studied submicron tunnel junctions capacitively coupled to minute islands, the Kosterlitz-Thouless transition in arrays of Josephson junctions, and tiny metallic whiskers grown on carbon nanotubes.

Until his retirement Mike maintained a large active research group.  Graduate students were attracted to him for his ability to make complex ideas seem simple and to offer thesis problems on the leading edge of the field.  He encouraged his students to explore new directions, giving them full freedom to follow their own ideas and develop as creative scientists.  He hungered for data from his labs and had an uncanny talent for transforming scraps of experimental data into an ever-deeper understanding of superconductivity.  Over 45 students received their Ph.D.s under Mike’s tutelage.  His well-trained students and postdocs easily found positions at leading universities and research laboratories.

Mike loved good food, good wine, and special desserts, sampling them all over the world.  His students were devoted and had an annual “Tinkham Dinner” at the March meeting of the American Physical Society.  Throughout most of his career he was quite formal and wore a coat and tie for most occasions, sometimes with a funny cap for the Boston weather.  But this attire did not hinder his fun with his students.  A special Science Center lecture to the interested public was advertised by a large colorful sign titled “Superconductivity” only to be doctored by his students on the night of the presentation to read “Sex and Superconductivity.”  He once walked into his lab where some of his students were having lunch and was upset to find that none of the homemade electronics were labeled. He demanded that everything in the lab be labeled for the next generation. The next day he found all the equipment duly labeled and his students sitting with bowed heads.  When they were asked to look up, Mike saw five foreheads labeled “Graduate Student.”

Mike is survived by his wife, Mary Tinkham, his sons, Jeff and Chris, and two grandchildren, all now living in Portland, Oregon.  His colleagues and students, deeply saddened by his passing, will always remember his warmth, friendliness, and enthusiasm, as well as the depth of understanding and insights he brought to physics.