Magnetism on the moon 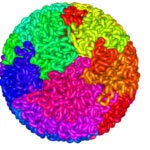 A new view of DNA

Researchers believe that powerful anomalies there resulted from asteroid collision

In the nearly five decades since the first lunar surveys were conducted as part of NASA’s Apollo space program, scientists have advanced a number of increasingly complex theories to explain the vast swaths of highly magnetic material that were found in some parts of the moon’s crust.

But now a team of researchers from Harvard, Massachusetts Institute of Technology, and the Institut de Physique du Globe de Paris have proposed a surprisingly simple explanation for the unusual findings, suggesting that the magnetic anomalies are remnants of a massive asteroid collision. As described in a paper published March 9 in Science, the researchers believe that an asteroid slammed into the moon approximately 4 billion years ago, leaving behind an enormous crater and iron-rich, highly magnetic rock.

While there is evidence that the moon once generated its own magnetic field, there is little to suggest it was strong enough to account for the anomalies seen in earlier surveys, said Sarah Stewart-Mukhopadhyay, the John L. Loeb Associate Professor of the Natural Sciences and one of three co-authors of the paper. To explain the findings, researchers turned to a number of elaborate scenarios.

“The conundrum has always been that the magnetism we see on the moon is not correlated with any surface geology,” she said. “The theory that has been most commonly cited to explain it is an ‘impact-induced field,’ in which an impact concentrates and amplifies the moon’s magnetic field. But it was difficult to test. People have tried to model it, but it is right at the edge of what could work.

“We have a simpler idea,” she continued. “Because the fields in this area are stronger than those found in any normal lunar rocks, our hypothesis is that it isn’t lunar material. We know the magnetic properties of asteroidal material are much higher than that of the moon. It is possible that metallic iron from an asteroid could have been magnetized by the impact, and deposited on the moon.”

Their first clue came from the surveys that had long confounded scientists. When combined with more recent, hyper-accurate topographical surveys of the moon’s surface, it quickly became clear that most of the magnetic anomalies are scattered around the rim of an enormous, 2,400 kilometer-diameter crater known as South Pole-Aitken.

The oldest definitive feature on the moon, the crater is between 3.9 and 4.5 billion years old, and is slightly elongated, suggesting it was formed by an object that struck at an oblique angle.

Testing that hypothesis, however, proved tricky.

“The question was whether the projectile material could survive and stay on the moon, and where it would end up,” Stewart-Mukhopadhyay said. “What I did was model the impact and formation of the basin, using computer codes that are typically used to model explosives.”

To create those models, Stewart-Mukhopadhyay started with “equations of state,” mathematical formulas that describe the asteroid and the moon’s crust, mantle, and core. The far trickier part of modeling the impact, however, is in describing the rheology, the conditions under which each material deforms and flows.

“We modeled a number of scenarios using faster or slower impacts and more shallow or more vertical angles,” she said. “Each time, the model produced similar results to what we see on the moon.”

Beyond its surprisingly simple explanation to a decades-old scientific puzzle, the paper suggests new ways to answer questions about what the early solar system was like, and how the magnetic fields of the planets were formed.

“We don’t have much evidence of what was hitting the Earth before 3.9 billion years ago,” Stewart-Mukhopadhyay said. “And there are some big questions about where those projectiles were coming from. Presumably, if you picked up even the soil from this part of the moon, you would have some of the material that came along with this large impact event.

“It may also be true that extraterrestrial materials play a larger role in the magnetic fields of other planets than anyone has appreciated,” she continued. “Magnetism is one of the clues that lets us construct a geologic history of the surface of a planet. If we now have to consider that it may have come from a collision like this one, that’s something we need to be aware of.”