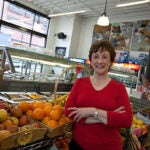 At a Meeting of the Faculty of Arts and Sciences on March 6, 2012, the following Minute was placed upon the records.

Leon Kirchner was born in Brooklyn on January 24, 1919, and died in Manhattan some 90 years later, on September 17, 2009.  These proximate locations mask the geographical and artistic odyssey of his life.  Raised in Los Angeles, he studied with Ernest Bloch and Arnold Schoenberg, later working with Roger Sessions.  Kirchner taught at the University of Southern California and Mills College before his appointment at Harvard University in 1961, where he was Walter Bigelow Rosen Professor of Music from 1966 until his retirement in 1989.

Kirchner’s music, which eschews the rigorous twelve-tone method practiced by Schoenberg, is imbued with searing intensity that bespeaks a spirit that relentlessly and mercilessly revealed his own complex and at times anguished personality. Its expressive power resulted in awards from the Guggenheim Foundation, the American Academy of Arts and Letters (1962), the American Academy of Arts and Sciences (1963), and the Center for Advanced Study of Behavioral Sciences (1974). Kirchner twice received the New York Critics Circle annual award (for the First and Second String Quartets), a Naumburg Award for his First Piano Concerto, and the Pulitzer Prize for his Third String Quartet (1967).

At Harvard, Kirchner decisively reoriented the study and practice of music beyond academic disciplines to include performance.  He founded the Harvard Chamber Orchestra, conducting visionary concerts of stylistic breadth.  His performances included regular visits to the Marlboro Music Festival in Vermont.  Kirchner’s influence on a generation of composition pupils was perhaps surpassed by the legacy of Music 180, a course he created in the analysis and performance of chamber music. His students included James Buswell, Lynn Chang, and Yo-Yo Ma.  Chang recalls, “Until [the] debut [of Music 180] in the late Sixties, arts performance at Harvard was strictly an extracurricular undertaking.  Kirchner believed that an undergraduate liberal arts education should embrace performance, a philosophy endorsed some forty years later in the Arts Task Force Report.

“To me as well as a generation of students fortunate enough to have participated in his course, a Kirchner class always involved a complete dissection of the score, not only analyzing its structure, but attempting to understand and interpret the composer’s meaning behind the notes.  Kirchner, despite being an accomplished performer himself, always thought like a composer, and thus we learned to think about the process of creation prior to the process of re-creation. Our development as musicians became deeper and more meaningful, our performances more sensitive and nuanced.

“Kirchner was charming, witty, rather soft spoken and a delightful raconteur. He regarded his art seriously, yet never took himself too seriously. He had a passion for life.  He had strong opinions. He was not merely an exceptional performer, composer, and educator, but an Artist.”

Yo-Yo Ma evokes the vibrancy of Kirchner’s urgings: “‘No, it must be moooore beeeOOOtiful! Like this: ra pa-pa peEEEMm!!! paPEEEMm, paPEEmm, paPEEMM!!’ . . .  Leon would exhort us to exceed our own capabilities by imagining, believing in, and creating a world that could transcend time and space, to go one on one with Beethoven, Schubert, Schoenberg, Bernstein.  A charismatic raconteur, a man who enjoyed contradictions, who could be at once grandiose and vulnerable, endearing and prickly, Leon fired our young imaginations, sometimes leading us, other times deliberately becoming our ‘boulder in the road.’  Years later, we find he has left a permanent mark on us, having set our sights onto a universe both grand and wondrous, leaving us to find our way to reach for it.”

John Stewart, long a central figure in the Harvard Music Department and a former Kirchner pupil, recollects, “In earlier years Leon Kirchner was ferocity personified . . . .  On occasion he was shockingly frank in his critique of student work, and several former students have written publicly about the power of his ‘put down.’ . . .  Over time one learned to respect this aspect of his demeanor, given his complete dedication to the muse; and to his students it was ultimately an example of what it is to be a composer, however daunting that could be to them at the time.

“Indeed, [his] leonine manner was always the result of the intensity of his engagement. It had a particularly impressive manifestation in his performances. With the Harvard Chamber Orchestra, his conducting brought forth a unique musical vision that was at once personal and compelling.

“Leon’s own music . . . has those same qualities of intensity and insight as part of its beauty, which is also and always, in my mind, combined with a courage that was unwilling to brook the temptations of any current trend or fad.”

In his biography of Kirchner, Robert Riggs wrote, “It was impossible to converse with Kirchner about music without immediately sensing his tremendous reverence for tradition—for the great composers of earlier centuries and their works. This went beyond awe of their technical mastery and high productivity . . . [it included] a crucial aesthetic component as well.”  He “subscribed to the Romantic tenet that extols the importance and value of music because of its affective power.  For Kirchner, music and life experience are intimately related” and he strove to establish and to “elucidate [the] connections, both in his own compositions and in his performances of works by others.” In a 1977 interview Kirchner stated, “To me the quality of music goes beyond simply putting together notes.  I look for a chord that will resonate somewhere deep in my soul.  My whole heart is involved in the choice of notes” and “[t]he thing that really strikes me more than anything else in music is not the intellectual concept of the structural material. I am attracted to the imagery, the humanistic aspect of the work and how it ignites my soul, my feelings.”

“Throughout his career, [Kirchner] maintained a remarkably independent course, faithful to and guided by his Romantic aesthetic and his conviction that tradition never loses its validity and power.”  He continued to compose well into his ninetieth year, “putting his whole heart into the choice of notes and creating works that resonated deep in his soul—and in ours.”