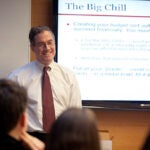 No shared glory. No one-game playoff. No consolation trip to the National Invitational Tournament. The Harvard men’s basketball team won the Ivy League championship outright this year — the first time in program history — and secured the team’s first trip to the NCAA Men’s Division 1 Basketball Championship Tournament since 1946.

“We are thrilled and honored to have an opportunity to compete in the 2012 NCAA tournament,” said Harvard head coach Tommy Amaker, who is in his fifth season with the Crimson. “This is a tremendous moment for Harvard University, our basketball program, and our community. Go, Crimson!”

On March 3, Harvard secured at least a tie for the Ivy championship for the second year in a row with a win at Cornell. On March 6, with the University of Pennsylvania’s loss to Princeton — the team that dealt Harvard a heartbreaking loss in a one-game playoff last year — the Crimson had their first outright title. The championship was the perfect cap to another record-setting season, one in which the team compiled an overall mark of 26-4, 12-2 in the conference.

“We were very pleased to win the Ivy League title for the second straight season,” said Amaker. “Winning our league is one of our goals every year.”

Harvard’s 26 wins broke the record set during the 2010-11 season, which in turn bested the mark set in 2009-10. The success is a huge turnaround for a program that saw many losing campaigns before Amaker’s arrival, and had never won an Ivy title. Amaker credited the team’s good fortune in recent years to the effort of his players and assistants.

“Our conference is very competitive,” he explained. “Being able to win the Ivy League is a testament to the hard work of our student-athletes and coaches.”

The Crimson began the season with a surprise victory in the Battle 4 Atlantis tournament, whose participants included the University of Connecticut, the defending national champion. While Harvard did not play UConn during the tourney, the Crimson did vanquish Florida State, which was ranked among the top teams in the nation at the time.

The tournament victory propelled Harvard into the national rankings, a place the team occupied for much of the season. The Crimson rose as high as No. 21 in the ESPN/USA Today coaches’ poll and No. 22 in the Associated Press ranking as they ran their home winning streak to 28 games and saw 10 sellouts at Lavietes Pavilion. As for the accomplishments of individual players, senior forward Keith Wright became Harvard’s all-time leader in shots blocked, moved up to fifth in rebounds, and passed 1,000 points scored.

As in years past, the Crimson overcame adversity along the path to success. On the road, there were tough losses to Fordham and Princeton; at home, there was a heartbreaking defeat at the hands of the University of Pennsylvania, an outcome that ended the team’s winning streak at Lavietes Pavilion and hinged on a controversial call in the game’s closing seconds. But then Harvard pulled out tough wins on the road in close games against Columbia and Cornell, and demonstrated the resilience that has been its hallmark in recent years.

Harvard now looks to the post-season, with hopes of making some noise in the “Big Dance.” The team will find out when, where, and whom it will play on “Selection Sunday” March 11, when the tournament’s first round brackets are set. No matter where they land or what the score is when the final buzzer sounds, Amaker says that his focus — and that of his team — will remain the same: to continue to get better every year.

“It has been a privilege to witness our program grow over the past few seasons,” he said. “We are excited to watch ourselves continue to improve day in and day out.”