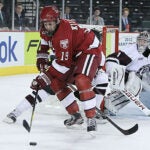 A measure of redemption

The members of the Harvard men’s basketball team held their heads high as they exited the NCAA Men’s Division 1 Basketball Championship on March 15, and with good reason. In their first trip to the tournament since 1946, the Crimson gave heralded Vanderbilt a scare, cutting an 18-point deficit to 5 before falling to the Commodores, 79-70. Despite the loss, Harvard showed that it deserved a place at the “Big Dance.”

“I think we battled very hard,” said forward Kyle Casey ’13 after the game. “We didn’t just give in when we could have given in. We feel like we belong here.”

Although the loss was disappointing, the Crimson and their fans can look back on a remarkable season. The team won the Ivy League championship outright for the first time in program history, beating out longtime rivals Penn and Princeton. Harvard’s 26 wins broke the record the men’s team set last year. Along the way the Crimson won the Battle 4 Atlantis (B4A) tournament, beat nationally ranked Florida State University, ran their home winning streak to 28 games, and rose as high as No. 21 in the ESPN/USA Today coaches’ poll and No. 22 in the Associated Press ranking.

“We won our conference,” said coach Tommy Amaker at the tournament’s Media Day. “We’re very excited about how we were able to do that and certainly be in this position to be 12-2 in the Ivy League and 26-4. We had a sensational year.”

Amaker said that the Crimson’s season can only help him and his staff to build a stronger program. While co-captains Oliver McNally and Keith Wright graduate this year, starters Casey and Brandyn Curry will return next season. The loss of the team’s seniors also will open up playing time, including for highly touted freshmen Wesley Saunders and Kenyatta Smith. The Crimson’s recent success brings the team closer to its aim of joining Stanford and Vanderbilt as one of the top basketball programs in the country.

“That’s kind of a goal of ours, to see if we can get involved in those circles,” Amaker said. “We’ve been able to do it. Our staff has worked incredibly hard to identify those prospects and try to build relationships with those kids and the various individuals around them. Certainly, having some success here with our program, I think, has allowed us to gain some traction and a foothold to make our way and to identify the kids who fit the profile for Harvard. That’s a neat thing for us, to be in those circles with Vandy and Northwestern and Stanford and those schools with the kids that we’re trying to compete for.”