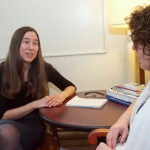 The hub of the post-College universe

A few visitors got a first glimpse of how Old Quincy House will look after the completion of the renewal process next year, thanks to a tour of a full-scale mockup of the soon-to-be-renovated accommodations. The model, constructed at One Western Ave. by Harvard Planning and Project Management (HPPM), showcases improvements and upgrades to rooms on a typical Old Quincy corridor.

“The mockup is an example of a modernized, upgraded space that faithfully preserves the historic character of Old Quincy House,” said Dean Michael D. Smith of the Faculty of Arts and Sciences (FAS). “It allows us to test designs and configurations before we move into construction late this spring. Just as the test project is designed to inform a future House renewal effort, the model is designed to inform the test project, and it seems we have a combination of elements that really excites people.”

The mockup — which consists of a bathroom, a common room, and two bedrooms — represents a cluster community, one of the project’s key components. Although half of the rooms in Old Quincy will continue to be suites of bedrooms and a common room, the rest will come in clusters, featuring a common room shared by 10 to 16 students, who live in single or double bedrooms. Students in the suites and clusters will share hall baths. A small number of the suites will be two-story duplexes with baths.  The primary hall bath configuration will consist of two toilets, two showers, and two sinks in stalls with a high level of privacy that will be shared by 8 to 10 students. Single unisex baths will also be provided for additional privacy and convenience.

“The Old Quincy test project is the result of a long conversation with students and faculty about how to renew the House,” Hammonds said. “The cluster arrangement will allow us to eliminate walk-throughs, maximize the number of single rooms, and transform the lower level into common space, all of which will boost quality of life for the House’s undergraduate residents.”

Enhanced tutor communities, an important element in Old Quincy’s renewal not included in the mockup, will provide additional cohesion to the clusters. Each tutor will have a similar number of students and live in an apartment that is physically central to his or her  community. Each will have a common room with a fireplace that is a visual center for his or her group.

“Tutors reinforce the values and strengths of House life,” Hammonds said. “The test project will improve the clarity and boundaries of their communities, which are a critical component of the learning experience at the College.”

“The cubbies are actually a request of students who participated in the feedback committee we convened,” Bicknell explained. “They won’t be locked, but will give the students a chance to leave their things here. That way, they don’t have to carry wet or soapy items back to their rooms, or leave them lying around the common bathroom space.”

Next door was a model of a cluster common room with large, comfortable chairs and an ornamental fireplace. When the test project is complete, wireless Internet access will flow through the space, and flat-screen TVs will be mounted above mantelpieces, wired for easy connection with students’ Xboxes and PlayStations. Architect Steve Kieran said that these rooms will be the hubs of smaller communities throughout the House.

“Each cluster is centered on a shared commons with a fireplace, wall-mounted television, and comfortable lounge furnishings,” Kieran said. “There will be artwork and other things that represent the cluster both here and in the halls.”

Just down from the common space were two model bedrooms, a single and a double. Both included sturdy oak dressers, desks, and beds. The single was compact, but not cramped. With both beds on the floor, the double still felt roomy and, with the beds bunked, would be positively spacious. Best of all, Needham said, the rooms’ size and configurations would maximize the number of singles available to residents.

“All the seniors and half the juniors will have the opportunity for a single, if they choose,” he said.

Sustainability is prominent in the renewal plan, which aims for Leadership in Energy and Environmental Design (LEED) Gold certification from the U.S. Green Building Council. The entire building envelope will be insulated, and the windows replaced to increase conservation and comfort. Mark Johnson, Harvard’s vice president for capital planning and project management, said that the Old Quincy Renewal will also emphasize recycling and reuse. Wood floors will be re-sanded and refinished, rather than replaced. Doors will be resized to fit new entrances. Even the rain that falls on Old Quincy will be captured and used to supply wastewater.

“The general approach is to keep as much of the old building material as possible, if it’s still serviceable and if it will last,” said Johnson. “The most sustainable option is always to use existing materials. To the extent that we use new materials, they will be subject to rigorous sustainability review.”

Needham said that the improvements to Old Quincy are also sustainable in a different way: They are designed to last. The bathroom finishes and other renovations should be good for 50 to 75 years and should serve generations of students well.

“Over time, you’ll change things like the fixtures, faucets, etc.,” Needham said. “But I think that the materials we’ve chosen are very durable. They’re easy to maintain and should stand up to undergraduate use.”

Quincy House Co-Masters Lee and Deborah Gehrke came away from the tour feeling excited about the impending renewal project. Although they were impressed with the updates and improvements, they were most pleased that the model still felt like home.

“The renewed space had the unmistakable look and feel of Old Quincy,” said Lee Gehrke. “It was very reassuring, and increased our excitement about the project.  We’re looking forward to the ground-breaking ceremony in May!”