In a drying Amazon, change looms 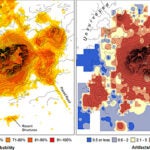 If predictions of increasing Amazonian drought come true, the vast rain forest will be replaced by trees adapted to seasonal dryness in some places, while in others the land will be taken over by a mix of trees and grasses that will make up a savannah.

That was the message from South American botanist Guillermo Goldstein, a professor at the University of Buenos Aires and the Robert F. Kennedy Visiting Professor in Latin American Studies at Harvard. Goldstein, who has spent his career studying the plants and ecosystems of South and Central America, delivered the Robert F. Kennedy Lecture at the Center for Government and International Studies on March 22. The talk, called “From the Amazon to Patagonia: An Ecological Journey through Latin American Ecosystems Facing Human Intervention and Climate Change,” was sponsored by the Rockefeller Center for Latin American Studies.

Many of those ecosystems are under some kind of threat, from climate change, invasive species, or development and land use change brought on by humans. Global computer models of climate change see increasing drought in the Amazon. If those models are true, Goldstein said, changes will largely be dependent on the level of nutrients in the underlying soil. Trees adapted to seasonal droughts will grow on rich soils, while nutrient-poor soils will convert into savannah.

Another threat to the rain forest is slash-and-burn agriculture. Though the forest can reclaim abandoned plots, it can take decades to restore the soil nutrients used by agriculture.

Even more endangered are the Atlantic tropical forests, which lie along the continent’s coast. Those forests have been heavily fragmented and cleared, Goldstein said, now covering just 5 percent of the land they did 100 years ago. Restoration of these forests is inhibited by the growth of bamboo grass, which keeps trees from re-establishing themselves on areas that have been logged and abandoned.

Savannahs are marked by a mix of grasses and trees, though the proportion of each varies from place to place. Fire is a factor in maintaining the ecosystem. In some places, farmers are replacing savannah with soybean farms and cattle ranches. One potential problem is that as trees are cut down, the ability of roots to pull water and nutrients from deep in the earth is lost, meaning soil may have to be fertilized artificially.

Mangrove ecosystems, which grow along the coast, are threatened by coastal development and logging.

Goldstein said the region’s political transition to democracy in recent decades has led to economic growth. While that has been beneficial to society, it has increased pressure on the ecosystems. He said that more knowledge is needed to inform management decisions. Some ecosystems, for example, won’t readily grow back if disturbed for agriculture. Others, like the forests inhibited by bamboo grass, need help through actions, in this case, clearing the grass.

“I hope our Latin American countries can continue improving their economies, closing the gap between rich and poor, developing more egalitarian societies with equal access to education, health services … while at the same time preserving natural resources and the environment for future generations,” Goldstein said.