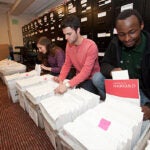 At Harvard since 2007, he specializes in global Christianity

Harvard University President Drew Faust announced today that David Hempton will become dean of Harvard Divinity School, effective July 1. Hempton, the Alonzo L. McDonald Family Professor of Evangelical Theological Studies at the Divinity School, succeeds William A. Graham, who last September announced his intention to step down from the post at the end of this academic year.

“David Hempton is an internationally recognized historian of Christianity with an exceptionally distinguished scholarly record,” said Faust, in announcing the appointment. “His broad-ranging interests in religion, political culture, identity, and ethnic conflict, and the history and theology of Evangelical Protestantism make him particularly well-suited to advance the understanding of religion at Harvard and in this religiously pluralistic world. His incisive intellect and high-level engagement with both the scholarly and administrative issues at the School will serve him well as dean, and I am delighted that he has agreed to take on this leadership role.”

“I am grateful to President Faust for this opportunity, and I am honored and humbled to be asked to serve as the next dean of the Harvard Divinity School,” said Hempton. “I look forward to working with colleagues at the Divinity School to build on the progress made over the last decade in expanding and strengthening the faculty across a range of fields and broadening the scope of the education offered. I also welcome the opportunity to engage with colleagues in the Faculty of Arts and Sciences and across the University to improve Harvard’s approach to the study of religion at the undergraduate and graduate levels and to enliven our engagement with religious and ethical questions more broadly.”

A prominent scholar focusing on global Christianity, Hempton is a native of Northern Ireland and former director of the School of History in the Queen’s University of Belfast. Hempton arrived at Harvard in 2007 from Boston University, where he was University Professor and professor of the history of Christianity. In 2008, he was named the Divinity’s School “Outstanding Teacher of the Year.”

As director of the School of History in the Queen’s University of Belfast, Hempton had broad authority over budget and management, faculty recruitment and curriculum, and preparation for the national university research and teaching assessments. Hempton has also served as an external consultant for the Open University and the British Broadcasting Corp. in the design of multimedia course offerings in the history of Christianity.

Hempton is a fellow of the Royal Historical Society, and a former chairman of the Wiles Trust, founded in 1951 to promote innovative thinking on the history of civilization, broadly conceived. He has held fellowships from the Wolfson and Nuffield Foundations and the National Endowment for the Humanities. He has been a visiting scholar at St. John’s College Oxford, and has delivered various endowed lectures, including the Cadbury Lectures at the University of Birmingham (1994) and the F.D. Maurice Lectures at King’s College London (2000).

Hempton is the author of many books and articles, including: “Methodism and Politics in British Society, 1750-1850” (Stanford University Press, 1984), winner of the Whitfield prize of the Royal Historical Society; “Methodism in Irish Society 1770-1830,” proxime accessit for the Alexander Medal of the Royal Historical Society (1986); (with Myrtle Hill) “Evangelical Protestantism in Ulster Society 1740-1890” (Routledge, 1992); “Religion and Political Culture in Britain and Ireland: From the Glorious Revolution to the Decline of Empire” (Cambridge University Press, 1996), shortlisted for the Ewart-Biggs Memorial prize; “The Religion of the People: Methodism and Popular Religion c. 1750-1900” (Routledge, 1996); “Faith and Enlightenment” in the “New Oxford History of the British Isles” (OUP, 2002); “Methodism: Empire of the Spirit” (Yale University Press, 2005), winner of the Jesse Lee Prize; “Evangelical Disenchantment: Nine Portraits of Faith and Doubt” (Yale University Press, 2008); and “The Church in the Long Eighteenth Century” (I.B. Tauris, 2011).

Having recently completed a study of global Christianity in the early modern period, he is currently engaged on a comparative study of secularization in Europe and America from the 18th century to the present.

Hempton is married to Louanne Hempton, and has two grown children, Stephen and Jonney.