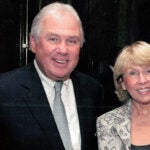 Signed an agreement with U.S. Army to re-establish on-campus relationship

Harvard University announced today that it has signed an agreement with the United States Army to re-establish a formal on-campus relationship with the Army Senior Reserve Officers’ Training Corps (SROTC).

“This is a welcome step in the long and distinguished history of military service by members of the Harvard community,” said President Drew Faust. “At Harvard, military service is rightly regarded as public service, and I am pleased that we can now broaden access for our students to the leadership and learning opportunities that Army SROTC training provides.”

Under the agreement, the Army’s professor of military science at Massachusetts Institute of Technology (MIT) will conduct office hours and provide on-site mentoring to cadets at the Harvard campus. The University will resume direct financial responsibility for the costs of its students’ participation in the program and it will provide the Army with office space and access to classrooms and athletic fields.

“The Army welcomes the opportunity to expand its presence on the Harvard campus. ROTC provides officers to the Army from a diverse mix of over 1,000 colleges and universities. Students commissioned from Harvard have long enriched our officer corps,” said Maj. Gen. Mark McDonald, commander, U.S. Army Cadet Command.

“In recent years, the Army has made tremendous strides on racial and ethnic diversity and leadership development, and it’s important to have them here to work with our students,” said Harvard College Dean Evelynn M. Hammonds.  “Just as importantly, universities like Harvard must continue to be involved in training the next generation of military leaders.  The Army SROTC’s formal return to Harvard helps further those goals, while continuing to expand opportunities for our students to serve their nation through military service.”

Harvard Army ROTC — established in 1916 — is one of the nation’s oldest ROTC programs.  Since 1976, Harvard students have participated in ROTC programs through a military consortium involving several area colleges and hosted nearby at the Massachusetts Institute of Technology. Currently, 18 Harvard students participate in ROTC, including six Army cadets.

Under the new agreement, Harvard Army cadets will continue to participate in Army SROTC through the highly regarded Paul Revere Battalion at MIT as the Army has determined that maintaining the consortium is best for the efficiency of the battalion.

“I look forward to working on the campus at Harvard, and I am gratified by the welcome that we have received from the administration and the student body. The Paul Revere ROTC Battalion is one of the best in the Army right now, and expanding at Harvard will make it even better,” said Lt. Col. Timothy Hall, professor of military science at MIT.

A ceremony marking the new agreement is planned for when the Army SROTC moves into office space in the Student Organization Center at Hilles later this academic year.