Filmmaker who bore witness to Holocaust 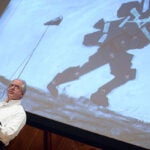 Claude Lanzmann created “Shoah” (1985), that iconic act of cinematic witnessing that decades ago revised the way people view the Holocaust.

Lanzmann, the film’s chain-smoking, tireless interviewer, is 86 now, and his celluloid image is hard to reconcile with the man who visited Harvard for two days last week (March 22 and 23). In events to promote his memoir (“The Patagonian Hare,” freshly translated into English) and to screen his latest film (“The Karski Report,” 2010), he appeared before packed auditoriums looking hunched, florid, and weak from a fever and cough. At each event, “I am sick” were his first words.

But then came the flashing insights, the sharp opinions, and the impatient brushing off of questions he deemed stupid. This is the same tough-minded Claude Lanzmann, after all, who for 12 dogged years pursued the witnesses for “Shoah,” ex-Nazi, Pole, and Jew alike. He also arranged to film much of his work in Poland’s now-placid scenes of old crimes, and he fought to bring order from nearly 300 hours of film, honing it to nine-and-a-half hours.

It was also the same Lanzmann who as a teenager (and a secret Jew) joined the French Resistance; who sometimes hid a revolver in his school uniform; who once escaped arrest (his father saved the day, blazing to the rescue with a Colt pistol); who clamped magazines into a Bren machine gun during an ambush of German troops; and who — as a postwar, cash-poor philosophy student in Paris — once dressed as a parish priest to cadge money for a phony charity.

Why the “hare” in the autobiography’s title? It’s the question with which Peter E. Gordon began his March 22 conversation, and Lanzmann’s answer was immediate. “They are beautiful, they are fast,” he said, adding the word “noble” in the book itself, where he recounts seeing hundreds of the fleet animals on a Patagonian roadway. Lanzmann reminded his audience that “Shoah” includes two brief scenes that lingered on hares, with one crouching to escape under rusting barbed wire at Birkenau. “I like to think,” he wrote of Jews in his gorgeous, lushly detailed book, “that many of my people chose, as I would, to come back as hares.”

In the film, when the hare slithers under the wire, there is a voice-over by Rudolf Vrba, a Slovak Jew who escaped from the Auschwitz concentration camp after nearly two years of captivity, and who immediately wrote a report that he said could have saved some of those doomed to extermination. He was interviewed for “Shoah,” and was “one of the heroes of the film,” Lanzmann wrote.

Gordon is Harvard’s Amabel B. James Professor of History and moderated the first event, a conversation with his witty, difficult subject in Boylston Hall’s Fong Auditorium.

The lovely landscape of Patagonia reminded the director of a lesson he embraced often after the war — that places are resonant, rife with meaning and memory.

In “Shoah,” the landscape itself is a witness. Long panning shots take in green fields where bodies were burned and bones were pounded into meal with sticks. There are mounds of earth, sloping pathways where naked Jews were harried, heaps of stones from crematoria, placid rivers on which Nazis once fished, and the gravel lot where a castle-like prison had stood. Behind there, long ago, were parked the gas vans that were the original instruments of mass murder. Lanzmann, who began the film’s interviews three decades after the war, was astonished to be “first on the scene of the crime.”

And he was astonished to find anyone involved still alive, he said. “When I started this work of 12 years, I thought everybody was dead — the killers too, and the witnesses. To discover some were alive was like an archaeological excavation.”

The film is not about survivors, said Lanzmann, or about the searing horror images of the Holocaust. (There are none in “Shoah,” “not a single corpse,” he said.) The film is about getting to the heart of the gas chamber — one was so big that 3,000 people could be gassed at once — and to the heart of the unseen. “It took time to find the core of this film,” said Lanzmann, “and the core is the gas chamber.”

As for the film’s human witnesses, including a barber who cut women’s hair as they waited, unknowing, in the gas chamber, he said: “I don’t call them survivors. I call them ghosts.”

Lanzmann touched on his reputation as a harsh interviewer, including the scene in “Shoah” in which he hectors Abraham Bomba, once a barber at Treblinka, to finish his story. There were only five minutes of film left in the camera, Lanzmann said. Besides, in that kind of work, “you can’t expect the fair-play rules of a cricket player.”