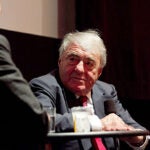 Filmmaker who bore witness to Holocaust

The Radcliffe Institute for Advanced Study hosted a reunion of sorts last week, with India the connecting thread that wove through longtime friendships, feature films, fact, fiction, and magical fantasy.

“I know this is complicated, but it’s so amazing,” said Radcliffe Dean Lizabeth Cohen in her opening remarks. “We have in our presence today three remarkable women who are united by a friendship and a shared passion to communicate the complexity of life, particularly for women in south Asia.”

On campus to deliver the Rama S. Mehta lecture, the filmmaker Deepa Mehta (no relation), whose work captures life’s beauty and brutality in equal measure, acknowledged another guest in the crowd. The friend was author Bapsi Sidhwa, a former Mary Ingraham Bunting Institute fellow. (The Bunting was precursor to the Radcliffe Institute.) Sidhwa’s celebrated novel “Cracking India” inspired Mehta’s 1998 film “Earth,” which tells of the nation’s violent 1947 partition.

When it was her turn at the podium, the director asked Harvard’s Jacqueline Bhabha to raise her hand. The University adviser on human rights education waved a greeting from her seat. Mehta thanked her for having her son, Satya Bhabha, star in Mehta’s forthcoming film “Midnight’s Children,” based on Salman Rushdie’s book of the same name, which uses magical realism to examine historic events like India’s independence from Great Britain.

Mehta fleshed out those influential connections in exploring her life as a filmmaker, and offered insights into the often tumultuous, sometimes dangerous work of creating her famous “Elements Trilogy:” the films “Fire,” “Earth,” and “Water.”

The Indian-born director perfectly fit the bill for an event established with the goal of bringing to campus a distinguished woman in public affairs, the sciences, or the arts who has a deep understanding of the problems of women in developing countries. With India as a frequent backdrop, her films address complex social themes such as arranged marriage, isolation, racism, homosexuality, and domestic violence.

“Fire” took shape at her kitchen table in Canada, she said. As an immigrant to North America, she was inspired by longing, curiosity, and nostalgia to write the film’s script one snowy day as she pondered “the extreme thing two women could do to test the strength of men in [Indian] society.”

The film tells the story of a relationship between two women in a country where homosexuality is largely taboo. “We made this film which was about love … and choice,” said Mehta. But many people in India saw it differently. Reaction to the work was swift. Shortly after the film opened, “all hell broke loose,” said the director. Critical response was favorable, but Hindu fundamentalists attacked the theaters that dared to show it. Protests for and against the work erupted in the streets, and the government temporarily shut down the screenings.

But though painful, the political backlash taught Mehta a difficult lesson: to accept the word “controversial” whenever her name or her works were discussed. “I began to understand,” said the director, “what it would mean to wear that label.” She also realized the power of the art form. “ ‘Fire,’ ” she said, “touched a nerve.”

Her experience with an Indian house for widows compelled her to make the subject the focus of  “Water.” But controversy stirred during filming.

“I had never come across anything so appalling,” said Mehta of the homes, scattered across the country, that house women, largely outcast by society, who often fall into prostitution or begging simply to survive. Armed with Chen’s work, she wrote the script and set to work filming. But the project was quickly derailed. Angry crowds called it anti-Hindu, and violent mobs destroyed the sets.

“It was as if a whole army had been unleashed on a little independent film crew on the banks of the Ganges” River, said Mehta.

The government shut the film down, and work ceased on it  for two years. But Mehta was undaunted. She moved the production to Sri Lanka and completed the film. “Water” was eventually screened in India, where it was well received and had a lasting impact. “It helped and touched a lot of widows … It has empowered them,” said Mehta. “Films do help.”

Mehta connected with Rushdie when he attended a screening of “Water.” She asked him to write a quote for the movie’s poster, and the two became close friends. A common sensibility, background, and generational perspective deepened their bond.

When Mehta suggested they collaborate on “Midnight’s Children,” Rushdie immediately agreed. Problems with the production included trouble casting female Bollywood stars. Some young women feared that playing one of the main characters, the mother of a teenager, would rob them of their youthful appeal. Then there were issues with dengue fever, and escaped cobras. But nothing could halt the film, said Mehta, who collaborated closely with Rushdie on the script.

Rushdie’s work, she said, “gave India a complexity I was always looking for.”

Sidhwa, who spoke briefly at the end of the talk, recalled playing the foil to censors assigned to monitor the making of “Earth.” On the set, the author would conveniently ask the watchful government official to go in search of the Indian frozen treat kulfi, she said, whenever a controversial scene was approaching.

The author summed up Mehta with four words.