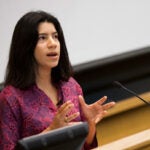 Students will present Gates with an honorary degree to recognize his scholarship, achievements, and unwavering commitment to civil rights and social justice. Gates, director of the W.E.B. Du Bois Institute for African and African American Research at Harvard, has written extensively for The New Yorker and The New York Times. He is author of numerous books, most recently “Black in Latin America” and “Faces of America,” which expand on his critically acclaimed PBS documentaries. He is also editor-in-chief of TheRoot.com, a daily online magazine focusing on issues of interest to the African-American community, written from an African-American perspective.