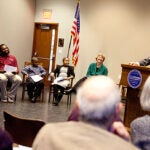 Tasnoba Nusrat didn’t make money over Wintersession. She learned how to make her money go further.

“I attended the ‘Personal Money Management’ course offered by Harvard University Employees Credit Union [HUECU],” she explains. “Now I’m more informed and manage my money more prudently. I use tools like Mint.com to measure how I spend and save. I feel confident about becoming economically independent in the future.”

Nusrat and her Harvard classmates learned a range of practical skills during Wintersession 2012 — from money management, to nonfiction writing, to cooking. College officials are still analyzing student comments and evaluations, but say that the response to January’s programming was strongly positive. They credit Wintersession’s success to a focus on real-world knowledge and a greatly expanded schedule of offerings. Just one year ago, the College approved 98 events and activities for the eight-day Optional Winter Activities Week (OWAW). This year’s Wintersession was longer (12 days) and offered more than 140 programs.

“Wintersession 2012 gave College students more time to explore new knowledge and experiences,” said Harvard College Dean Evelynn M. Hammonds. “Undergraduates responded by proposing many more activities than last year, and by participating in numbers that were often far above the expectations of program organizers. I’m very pleased to see the way that students took advantage of this important time between semesters.”

Winter Break 2012 had three phases. The College closed down for Winter Break I (Dec. 22–Jan. 2). During Winter Break II (Jan. 3–12), international students, artists and musicians, and approved thesis writers returned to campus. Off-campus, students participated in a range of Harvard-associated programs, including the popular Harvardwood 101 career exploration in Los Angeles and Global Networking Night at sites around the world.

All students were invited to return to campus for Wintersession beginning Jan. 13. College officials say that many flocked back for the optional period of student- or faculty-led activities that included scores of arts intensives, health and wellness seminars, sports and recreation, and career-related programming. A rough estimate of dining service utilization indicates that more than 2,000 students were in residence midway through Wintersession. Lisa Boes, Allston Burr Resident Dean of Pforzheimer House and coordinator of Wintersession 2012, says that interdepartmental cooperation helped make many programs a success.

“The most successful programs were collaborations,” Boes says. “So Career Services and Phillips Brooks House partnered with Alumni Affairs. Harvard Recreation got together with the Center for Wellness. Again and again we saw that, when offices and groups collaborated, they could offer the best-quality programs.”

Students also gave a warm reception to activities that taught practical skills, such as the personal money management program Nusrat attended. HUECU CEO Gene Foley says that students are eager to understand their own finances, and he cites participation in the Wintersession class as proof. Foley says that his team expected 35–40 students to sign up for the program, taught three hours a day, Jan. 9–12. More than 90 registered for the course.

“There’s a void in American life for financial knowledge, particularly when it comes to students,” he explains. “As a result, the fastest-growing segment in personal bankruptcy is recent college grads. Kids get out of school with loans and credit card debt, but without the skills to navigate financially. Our data show that at Harvard only about 10–15 percent of students across the University have ever attended any type of financial education workshop, so they were very enthusiastic about the chance to learn.”

Undergraduates who participated in one of the more than two dozen activities sponsored by the Office of Career Services (OCS) were as enthusiastic about exploring ways to make money as Foley’s students were about learning to manage it. Events such as the Campus Interview Program Online Chat and the “Case Interview Workshop” — both of which helped participants to prepare for interviews with visiting recruiters for companies like Google — each drew nearly 150 students, a response that far exceeded that anticipated by organizers.

“Based on last year’s program, we expected only about 100 students to use the chat hours or come to the workshop,” says OCS’s Marissa Long. “With the online program, students wanted the opportunity to reach a person and get reassurance that they were filling out the interview applications right. Chat made it really easy. The case program is a two-hour workshop, so it is nice to offer that when there are no classes going on. Students got an introduction to the case interview process, but more than that, they got the opportunity to practice, which is the most important thing.”

Wintersession gave Miriam Farkas ’14 the opportunity to practice and teach one of her passions: cooking. Her course, “Through the Cooking Class,” met in House kitchens over four nights. There, she and her classmates experimented with new recipes that Farkas concocted beforehand.

“I strongly encouraged my students to play with ingredients and incorporate dorm-friendly ideas as they tried out recipes,” she says. “We made ‘salad bar’ sushi from our favorite dining hall vegetables, microwavable fudge from just four ingredients, as well as muffins and pies. Each student had the chance to make every recipe, and to make every recipe his or her own.”

Winter Break 2012 wasn’t all practice and practicality. Many students also took the opportunity to explore their creative sides. Students in the new art group the Harvard Generalist mounted a performance art piece in Adams House titled “Blah, Blah, Inc.,” which consisted of an attempt to break the world record for the longest two-person phone call. Although only two students — Eric R. Brewster ’14 and Avery A. Leonard ’14 — could be on the line during the 46-hour call, hundreds stopped by to play with the actors, manipulate the set, and start their own conversations about the event. Stage manager Ginny Fahs ’14 calls the activity “a huge success” and credits Wintersession with the opportunity to create art that challenged and engaged her classmates.

“The event was a test of endurance — physical, mental, and emotional — and we all had to work for over 46 consecutive hours to sustain the project and break the world record,” she says. “In the end we beat the world record by more than three hours, amassed an audience of approximately 300 people, and came away with newfound understandings about how conversation is an art form. Wintersession provided the space for us to get audiences to question the validity of art and the nature of art — something that Harvard students are not often asked to do.”

College officials are already planning for Winter Break 2013, which will be a whopping five weeks. Boes says the extra time will likely be added to Winter Break I, meaning that the College will be closed through Jan. 6, 2013. She says that she expects that many students will be anxious to return to campus next year. When they do, Boes says that undergraduates probably won’t find more Wintersession programming, but they may well find that existing offerings have improved.

“I do not anticipate that we will offer any more programs in 2013,” she says. “We have plenty of great activities. Next year we’ll focus on what worked best. Along those lines, we hope to do some leadership development work to help students run strong programs. We’ve got quantity. Now we want to make sure that students have the highest-quality Wintersession experience we can provide.”