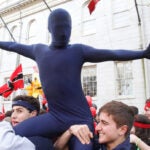 Order out of chaos

Daniel G. Nocera, a chemist whose work is focused on developing inexpensive new energy sources for the poor of the world now living with nothing more than fire light, has been appointed the Patterson Rockwood Professor of Energy in Harvard’s Department of Chemistry and Chemical Biology, Michael D. Smith, dean of the Faculty of Arts and Sciences, today announced.

Perhaps best known for having invented an “artificial leaf” that directly converts sunlight and water into a chemical fuel that can be stored, Nocera will teach both undergraduate and graduate courses at Harvard, in addition to conducting research.

“With his interdisciplinary expertise in fields related to energy synthesis, and his dedication to using that expertise to improving the lives of billions of people around the world, Dan Nocera is the kind of scientist and humanitarian who exemplifies Harvard’s contributions to society,” said Smith, the John H. Finley Jr. Professor of Engineering and Applied Sciences.

Currently, Nocera is the Henry Dreyfus Professor of Energy at the Massachusetts Institute of Technology (MIT) and the director of MIT’s Solar Revolutions Project and its Eni Solar Frontiers Center. He is a member of both the American Academy of Arts and Sciences, and the National Academy of Sciences.

A pioneer in the study of the basic mechanisms of energy conversion in biology and chemistry, Nocera said he was attracted to Harvard because “it’s not enough to just invent something; you need the wide interdisciplinary reach and focus of Harvard to fulfill the vision of bringing something to the entire world.

“President Faust’s vision of one Harvard — linking a laboratory in Chemistry and Chemical Biology with the international expertise available at the Kennedy School, insights from the Law School, [and] the experts at the School of Public Health — can make it possible to fulfill my goal of bringing the poor of the world their first 100 watts of energy. And if I can do that, I can, along with Harvard, literally change the world in a profound way for the better,” Nocera said.

A graduate of Rutgers University, Nocera earned his doctorate at the California Institute of Technology and taught at Michigan State University before joining the MIT faculty in 1997. He has published more than 325 papers and earned numerous awards, including the MIT School of Science Prize for Excellence in Undergraduate Teaching.