An opening against Alzheimer’s 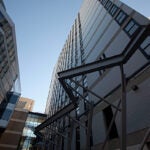 Under normal circumstances, the tau protein is a hard-working participant in memory and brain functioning.  But in Alzheimer’s disease and other neurodegenerative diseases, tau not only ceases to play a productive role in brain health, but actually undergoes a Jekyll-and-Hyde transformation to become a misshapen villain that destroys brain cells.

Now a novel antibody technology developed by a team at Harvard-affiliated Beth Israel Deaconess Medical Center (BIDMC) provides the first clear distinction between two tau isoforms — one healthy and one disease-causing — and demonstrates that only the disease-causing isoform is found in the neurons of Alzheimer’s patients and is exhibited at a very early stage of disease. Described in the March 30 issue of the journal Cell, the findings raise the intriguing possibility that the development of antibodies and vaccines that target only the disease-causing tau isoform could be used to diagnose, treat, and potentially even prevent Alzheimer’s.

“Since Alzheimer’s disease takes at least a decade to develop, the major challenge to halt memory loss is to identify the initial period when the tau protein is transformed from ‘good guy’ to ‘bad guy,’” said co-senior author Kun Ping Lu, an investigator in the division of hematology/oncology at BIDMC and professor of medicine at Harvard Medical School (HMS). “By developing an innovative approach to making antibodies, we have uncovered a new strategy to specifically remove disease-causing tau, while leaving healthy tau intact to carry out its important responsibilities.”

The most common form of dementia in older individuals, Alzheimer’s affects 5.4 million Americans and 30 million people worldwide. As the baby-boom generation ages and life expectancy continues to increase, these numbers are expected to rise dramatically, with some estimates projecting that by 2050 Alzheimer’s will affect 120 million people worldwide at a cost of more than $1 trillion in the United States alone. There is currently no effective treatment for the disease.