A vision of computing’s future 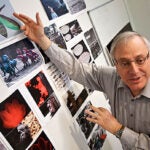 ‘A timeout from your regular life’

These days, there’s a plaque in Room 108 of Aldrich Hall that commemorates the day, in the spring of 1978, when Dan Bricklin had an idea that would forever change the personal computer business.

Then a first-year Harvard Business School (HBS) student, Bricklin watched as a professor sketched out a complex business model, and immediately saw the problem — changing a single parameter meant laboriously recalculating subsequent entries. It was then that inspiration struck. Why not let a computer do the tedious work for you?

That inspiration eventually became VisiCalc, a pioneering electronic spreadsheet and a progenitor of programs like Microsoft Excel. Released in 1979, the program is widely credited for helping to transform the personal computer from a toy for hobbyists into an indispensable business tool.

“After VisiCalc, it dawned on the world that, whatever the impact of the personal computer might be in the home, it was going to change the way business was done,” said Harry R. Lewis, Gordon McKay Professor of Computer Science. “The mainframe computer model required someone to make a huge capital investment. You had to be an employee of a very large company or rent time from a time-sharing service to use one. Once you had small computers, businesses could control their own data, and they could expand incrementally. It was hugely empowering for small innovators.”

Though his idea would go on to play a critical role in making personal computers one of the most ubiquitous appliances of the late 20th century, Bricklin, today the president of a Newton-based company that develops iPad apps, said the notion of a “personal” computer was completely foreign to most people in the late ’70s.

“Computers were not something used by the average person, any more than a nuclear reactor is something that’s used by a regular person today,” he said. “A computer for one person mainly only happened in research labs.

“Using a keyboard, even on a typewriter, wasn’t a common thing for most people in business; there were secretaries or steno pools,” he continued. “Email was used only by the techiest of techies. Using a computer to do financial forecasting — that was not something small businesses did. They usually did their computations by hand on ledger sheets and stored their data on Rolodexes and 3-by-5 cards.”

Bricklin, however, was one of the few who understood how those rules could be rewritten.

Already an experienced programmer when he arrived at Massachusetts Institute of Technology in the late ’60s, Bricklin pursued a degree in electrical engineering and computer science, and spent many hours programming interactive systems in the institute’s Laboratory for Computer Science. It was also there that Bricklin met VisiCalc co-creator Bob Frankston.

After graduating from MIT, Bricklin was hired by Digital Equipment Corp. Over the next several years, he worked on computerized typesetting systems and led the development of one of the earliest word-processing systems, the WPS-8. He later took a job at FasFax, a manufacturer of microprocessor-based electronic cash registers, before enrolling at HBS.

“I had the right combination of experience and knowledge to develop software that met a need people had,” Bricklin said. “I lived through the first digital revolution, the change from slide rules to calculators. Based on my experience at Digital, I was familiar with screen-based word processing of a sort. And after my experience at FasFax, I was very familiar with the type of electronic-based systems used by regular people. When I put all that together, it led me to the idea for VisiCalc.”

Though the product hit the market just as the revolutionary Apple II opened the public’s eyes to personal computers, it took several years before the program became the accepted paradigm in business, Bricklin said.

“The first time I got the feeling that we had made it was when the Wall Street Journal ran an editorial about Reagan’s budget, and it said there were legal pads and VisiCalc spreadsheets all over Washington trying to figure out how the budget would work,” Bricklin said. “My view of why it was important was that the people VisiCalc appealed to were the money people. They were the people who now understood that the personal computer was a viable business tool.”

While he may not have the name recognition of Harvard-born computer industry pioneers like Bill Gates or Mark Zuckerberg, Bricklin credits his time in Cambridge as a crucial factor in the development of the program.

“When I was at Harvard — the way it helped me to see the variety and how nonstandard the real world is — it was the perfect place to come up with the idea,” he said. “The aspects that made it special, that DNA has continued straight through into Excel, and even into the spreadsheet in Google Docs. They all follow that line. To see the decisions I made, and the things I started, continue that way … it’s like a dream come true.”