‘A timeout from your regular life’ 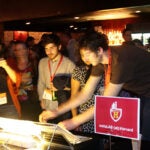 As a molecular genetics professor, Benny Shilo has spent much of the past three decades in a lab. He heads his own research group at the Weizmann Institute of Science in Israel and has had findings published in Nature, Science, Cell, and other scientific journals. He has been Weizmann’s dean of biochemistry and chair of the Department of Molecular Genetics.

Despite those scientific credentials, Shilo traded his lab coat for a camera bag this year, which he is spending at the Radcliffe Institute for Advanced Study.

Instead of peering through a microscope or reading the results of a genetic screen for the last year, Shilo has been peering through a camera lens, working on a project that uses scientific images and photographs of everyday people to explain concepts in developmental biology to the public.

Shilo is pairing the images in a public outreach effort that seeks to better explain what he does. One set of images, for example, shows a protein gradient within the fruit fly embryo, which gives rise to expression of specific genes in distinct domains of the embryo, visualized as different color zones. That image is paired with a photo of people in a museum, gathered around a guide. The scientific image represents a gradually declining concentration of a key signaling molecule. In the museum image, people farther from the guide strain to hear her words, just as the concentration of the chemical is weaker farther from its source.

The concentration gradient explains an important concept in developmental biology: how cells get different development signals from the same molecule, causing them to develop into discrete body parts at varying distances from the molecule’s source.

Shilo’s work, which includes dozens of images, has already been the subject of a show at Radcliffe and is being considered by some academic publishers as the subject of a book. Shilo is talking with Harvard’s Department of Molecular and Cellular Biology about using his work in science education and outreach. He said it is likely to be shown again when he returns to the Weizmann. He’s also exploring creating a Web page on the project and isconsidering other applications, such as having high school students engage in a similar project as a way to learn key concepts.

Shilo first considered coming to Radcliffe two years ago, but said he didn’t want to spend the time writing a major review paper or doing some similar scientific activity. He understood that the fellowship’s gift of time is a rare commodity, so he took a year to think about a project that would use the time creatively and allow him to try new things.

The paired images, Shilo said, are intended to make a viewer understand what it’s like to be a cell, by starting with key scientific concepts and then finding analogous circumstances in human life.

“Because of my background, I’m coming at it from the scientific side, defining paradigms and thinking of metaphors, and then going out and photographing,” Shilo said.

The process can be useful not just to the public, Shilo said, but to scientists as well. Working on the project forced him to narrow his focus to the concepts that are most important.

“You have to crystallize a concept to its barest essentials, just the most important facts, in order to find analogies,” Shilo said.

On a recent Sunday, Shilo grabbed a camera and headed to the Hi-Rise Bread Co. in Cambridge. He explained what he wanted to the baker and then shot images of the yeast, the starter dough, and the baked bread to help explain how stem cells provide a continuous source of differentiated cells in the body.

The year at Radcliffe has been rejuvenating, and in a way has brought him full circle in life, Shilo said. It has returned him to a part of the world important in his own development as a scientist. After getting his doctorate from Hebrew University, he came to the Massachusetts Institute of Technology for a postdoctoral fellowship, during which he undertook early genetic work on cancer genes that serendipitously directed him toward developmental biology.

“It’s a timeout from your regular life,” Shilo said of the Radcliffe Fellowship. “I got a chance to express my creativity in a different way.”