A new view of DNA 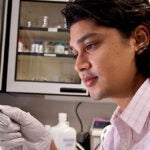 While it’s clear that DNA sequencing has been an indispensable tool in understanding any number of biological processes, new research from Harvard suggests that how DNA is packed into cells may be at least as important as the biological coding it contains.

A new imaging technique, developed by Erez Lieberman Aiden, a Junior Fellow of the Society of Fellows, working with Nynke van Berkum, Louise Williams, and a team of researchers from the Broad Institute of Harvard and MIT and the University of Massachusetts Medical School, is giving scientists their first three-dimensional view of the human genome, one that is already shedding new light on a number of what Aiden calls the “central mysteries of biology.” Aiden’s work was recognized recently with the GE & Science Prize for Young Life Scientists.

“We don’t have perfect pictures yet,” Aiden said, “only blurry ones; but that’s much better than no picture at all.”

“Traditional nuclear magnetic resonance imaging techniques are able to determine how far atoms are from each other, and extrapolate the structure of the molecule from that information,” Aiden said. “What we’re doing is quite different. You can think about the genome as a noodle that’s in a rapidly boiling pot. Every once in a while two parts of the noodle collide. What Hi-C does is measure the rate at which collisions happen between any two pieces of the genome. As you might expect, points that are nearer to each other are more likely to collide with one another, but sometimes points that are far apart collide more than we would expect.”

By pairing data about how often those collisions happen, and how quickly the collision rate drops at different points along the genome, Aiden and his colleagues are able to produce 3-D models that illustrate how DNA is packed inside cells.

Aiden’s hope is that the technique might eventually help unlock the physical processes that take place when genes are switched on or off, and how cells that contain identical genetic information become the many types of cells that make up the human body.

“We have ideas about what happens when genes turn on or off — we know certain proteins show up and they perform certain types of operations, but that’s only a tiny piece of a very complicated picture,” he said. “One question we may be able to help answer is how genes become physically accessible to those proteins.”

Early results suggest that, when packed into cells, DNA forms a structure called a fractal globule. Though capable of holding vast amounts of material, the structure is unique in that the material is completely unknotted, meaning, Aiden said, that “despite how densely it’s packed, you can pull on it, easily get to the region you want to transcribe, read it off, and put it back when you’re done.”

The data has also revealed that active and inactive portions of the genome are spatially segregated, indicating that the very way the genome is folded may play a role in which genes are active.

“It’s unclear right now whether a gene gets turned on and then is immediately relocated, or if the relocation itself is enough to turn a gene on,” Aiden said. “But in some sense what we were able to observe is a sort of epigenetics via origami.”