A chaplain without robes 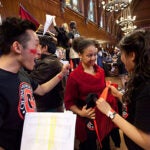 Divinity School student reflects on his calling, and how it has defined him

When what became Harvard Divinity School (HDS) was being built early in the 19th century, legend has it that its architects took special care to locate it on the northeastern edge of campus, as far away from the Yard as possible — ostensibly so that it would remain free from the perceived malignance of the freethinking, secular Yard. Therein are echoes of the old contest between religion and secularism, faith and reason.

Today, it would appear as though such a contest is largely a thing of the past. In a society described as “secular,” “post-religious,” and “pluralistic,” the ancient contest between church and state appears to have been decided overwhelmingly in favor of the latter.

If “and what are you going do with that?” is the question that is most often asked of a literature student after disclosing his major at a family reunion, then to tell the world that I am studying theology is often to be met with a befuddlement beyond words. When confronted by the Christopher Hitchens-wielding types from the Yard, I suddenly discover that I am a poor apologist for the ecclesiastical vocation, as I belong to neither formal tradition nor do I have sacred dogmas to defend. On the other hand, I admit that I do not find it easy to take pleasure in the easy confidence of the local street preacher when I say that “I am attending seminary.” I am not their kind, surely.

This, then, is the way I conceive of my ministry: In a gathering of skeptics, I am Christian; in a gathering of Christians, I am a skeptic. And all too often, wherever I am, I feel like a spy behind enemy lines.

To attend HDS is to be misunderstood. That is the first thing I would tell a prospective student of our quaintly charming institution. Many of us are neither of “the world,” nor of the familiar world of church and clergy as defined by the religious right. Displaced from both church and marketplace, many of us struggle to eke out a path in a wilderness that calls to mind any number of same in the Bible. Ours is a “third way,” a study in paradox, a home for the spiritually homeless and displaced, a center stage where the outliers gather.

The soul of HDS is not that of the world of “Ye Olde Time Religion.” But I would argue that there is something here even older than that, something redolent of a Puritanical flavor, a fundamentalism before Fundamentalism, as it were, so romantically original and American. There is that Emersonian spirit of nonconformity and dissidence, a kind of being “ill-at-ease” that drives our ministry and student engagements in such examples as the Occupy movement, campus feminism, and the anti-oppression coalition.

“All roads lead to Harvard Divinity School” is a familiar quip among divinity students, dripping of irony but possessing also a deeper sense. It is not unlike saying that the heart of America is to be found as much in Ralph Ellison’s Harlem or William Faulkner’s Yoknapatawpha as in the bright lights of Manhattan and Los Angeles.

I cannot presume to speak for all students at our fantastically diverse institution. But the place resonates with me precisely because of the ways it accords with my own life experience. I was born in central China, and I am a two-time immigrant, to England and Texas. Schooled in both the camps of Young Communist Pioneers as well as the American Bible camps of Christian Evangelicalism, the turning point for me came when I came to accept my difference with respect to the world, when I stopped fighting to belong seamlessly but rather to remain freely unintegrated. The secret, I discovered, was to speak from the margins and to listen — as Walt Whitman wrote — “to all sides and filter them from your self.”

Next year, I will attend law school, which will entail a new set of challenges. I am genuinely thrilled by the prospect of one day working for the public interest in Boston. Or, perhaps, I will return to my homeland of mainland China and labor for change there. Although I am neither the quickest nor the cleverest in any classroom, I am imbued with a desire to witness and to be present to the powerless of the world.

Last Aug. 8, I was strolling down Wall Street in Manhattan. It was about an hour after the closing bell on the stock exchange. The last of the traders were streaming out of the exchange after the sixth-largest daily points loss in the history of the Dow Jones. Their faces were gray and sunken like defeated soldiers. The clouds, the silence of the “troops” in orderly retreat, and the alleyway of Wall Street so narrow — it resembled an unreal scene from a movie about the Apocalypse. So were these the evildoers, the moneylenders who were driving our country to the ground? I wondered then and continue to wonder today. Who do we accuse, who do we sanction?

But that evening, there I was, fiercely close to where the world was turning dark. I was a chaplain without robes, a protester with neither slogan nor song.