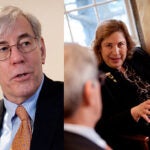 Pulling together for a better Harvard

Letters and email notifications of admission to Harvard College were sent today to 2,032 students, 5.9 percent of the applicant pool of 34,302.  Admitted students have until May 1 to accept their offers.

More than 60 percent of the families of students admitted to the Class of 2016 who will enter this coming August will benefit from an unprecedented $172 million in undergraduate financial aid, paying an average of only $12,000 per year for tuition, room, board, and fees combined.

Beginning in 2004, Harvard announced a series of dramatic increases in undergraduate financial aid, and since 2007 has increased aid by more than 78 percent.  Approximately 20 percent of families, those with normal assets making $65,000 or less annually, are not required to contribute at all.

Families with incomes up to $150,000 will pay from zero to 10 percent of their income, unless they have significant assets beyond income.  Depending on individual family circumstances, families with incomes above $150,000 still may qualify for need-based assistance.  Students and their families can estimate their costs by using the recently launched Net Price Calculator available on Harvard’s financial aid website.  Students are also expected to contribute to the cost of their education through term-time and summer work.

With the return of Early Action this year, it is more difficult than in the past to predict how many admitted students will accept Harvard’s offer of admission.  “We have always been conservative about the number of acceptances sent out at this time of year in order to avoid the possibility of overcrowding. Harvard’s high graduation rate — typically 97 to 98 percent — leaves little margin for error,” said William R. Fitzsimmons, dean of admissions and financial aid.  “As always, we expect to use the waiting list, and in some recent years as many as 200 students have been admitted in May and June.”

Extracurricular interests cited by students include music and other expressive and performing arts (41 percent); debate and political activities, including student government (35 percent); social service (21 percent); and writing and journalism (20 percent).  In addition, 57 percent of the class expects to participate in recreational, intramural, or intercollegiate athletics.

Slightly more than half (53 percent) of those admitted are men, perhaps reflecting the fact that more men than women applied, while geographic representation remained similar to last year.

Foreign citizens make up 10 percent of the admitted students.  In addition, a significant number of other entering students will bring international perspectives, including 122 U.S. dual citizens, 57 U.S. permanent residents, and many Americans who have lived abroad.  Together, foreign citizens, U.S. duals, and U.S. permanent residents make up more than 19 percent of the class, representing 86 countries.

“Our alumni/ae interviewers devoted countless hours assisting our office throughout the year,” said Marlyn E. McGrath, director of admissions.  “Personal qualities and character remain central to each and every admissions decision, and alumni/ae interviewers are essential to our process.  Our 15,000 alumni/ae volunteers around the world are irreplaceable in other ways as well: attending college nights, visiting schools, calling newly admitted students, and hosting gatherings for them in April.  We continue to marvel at their loyalty to Harvard,” she said.

Added Elizabeth Adams, liaison to the Alumni/ae Schools and Scholarship Committees, “We are particularly grateful to our alumni/ae volunteers for using our new electronic system to submit their interviews to assist the admissions committee in its vital work.  As always, they went above and beyond expectations.”

Recruitment is the foundation on which Harvard’s excellence rests.  Nearly 65 percent of all admitted students and 76 percent of admitted minority students appeared on the original College Board Search List that helped launch Harvard’s outreach program for the Class of 2016.

Staff members will visit 60 cities this spring, targeting high school juniors who may eventually join the Class of 2017.  Joint travel trips will be conducted with Duke University, Georgetown University, the University of Pennsylvania, and Stanford University.  “Joint travel provides the foundation of our recruitment.  Last spring and fall, Harvard admissions officers visited all 50 states, the U.S. Virgin Islands, Puerto Rico, and Mexico, where we saw 44,000 high school students and parents.  We also met with more than 3,000 high school guidance counselors,” said Jennifer Gandy, director of the Joint Travel Program.

“Undergraduate recruitment has a long and distinguished history at Harvard,” said Roger Banks, director of recruitment.  “Members of the Undergraduate Minority Recruitment Program (UMRP) and the Harvard Financial Aid Initiative (HFAI) once again played a vital role in attracting this year’s remarkable pool of students.”  Members of both organizations telephoned and sent email messages and letters to prospective applicants.  They also conducted recruitment trips around the country and met with middle school and high school student groups who visited Harvard.

“HFAI is one of Harvard’s highest priorities, and once again we were able to attract outstanding students from families with annual incomes under $80,000,” said Monica Del Toro-Brown, co-director of HFAI.  Precious Eboigbe, HFAI co-director, noted, “Our students worked closely with staff and alumni/ae, forming a partnership that enabled us to reach out to talented students from modest economic backgrounds who never dreamed Harvard was possible.”  Added Devery Doran, HFAI co-director, “We are particularly pleased to see a larger number of students admitted from families with incomes under $65,000.”

The Undergraduate Admissions Council (UAC) and the undergraduate tour guides and greeters worked throughout the year with campus visitors to Cambridge, leading tours and hosting prospective applicants overnight.  David Evans, co-director of the UAC, noted that “prospective students want to learn firsthand about the Harvard experience from current undergraduates.”  Added Mike Esposito, UAC co-director, “UAC members extend a warm welcome to students interested in Harvard.”  Jake Foley, UAC co-director, concurred, saying,  “The UAC provides a human face to the Harvard community, and we hear often from students and families that UAC members made the difference in students’ decisions to consider Harvard.”

Banks, director of the Student Tour Guide Program, said, “Our tour guides and greeters welcome students to Harvard throughout the year.  They love to share personal anecdotes about life in the College, both inside and outside the classroom.  Often, they are the first Harvard students a prospective applicant meets, and they introduce college life with grace, humor, and enthusiasm.”  Added Lucerito Ortiz, assistant director of the program, “Rain or shine, in small groups or large, you’ll find them walking through Harvard Yard, leading groups of prospective students and their families from around the world.”

McGrath emphasized the important role of the teaching faculty in the admissions process.  Faculty members speak with many prospective students in person or on the phone and answer their letters and email inquiries.  “Faculty accessibility is a clear demonstration of Harvard’s commitment to undergraduate education.  In addition, faculty members read hundreds of applications, evaluate academic research of all kinds, and assess portfolios across a range of academic and creative disciplines,” she said.

The admissions office reaches out to recruit students around the world through email and undergraduate student blogs.  Email allows students to communicate with Harvard undergraduates and one another, while the blogs offer an insider’s view of the College.  Elise Eggart, director of this effort, said, “The blogs provide yet another way for students to meet and make connections with future classmates.”

To give admitted students the opportunity to experience Harvard life and meet future professors and classmates, a visiting program for admitted students is scheduled for April 21 to 23.  The program, recently named “Visitas” by current undergraduates, enables guests to sample classes, attend faculty panel discussions, concerts, receptions, department open houses, symposia, and hundreds of events organized by extracurricular organizations.  More than 1,400 admitted students are expected to visit during April, and 1,200 will do so during Visitas.  “Contact with current undergraduates and faculty is critically important to students as they evaluate their college options,” said Director Valerie Beilenson.  Assistant Director Amelia Muller noted that “students often cite the visit as pivotal in their decision to choose Harvard.”

Sarah C. Donahue, director of financial aid, and her colleagues will be available to speak with admitted students and their families on weekdays during April from 8 a.m. to 8 p.m. EDT and on April 22, from 10 a.m. to 4 p.m. during Visitas.  “We look forward to talking with students and parents who have concerns or questions about how to finance a Harvard education, including families who may not have applied for financial aid but who are interested in the wide range of available payment options,” she said. “Our program offers assistance to all students and families, ranging from full financial aid to a number of financing alternatives: a monthly payment plan, the opportunity to prepay tuition at current rates, and a variety of parent loan programs that extend payments up to 15 years.”