Willing a way to clean water 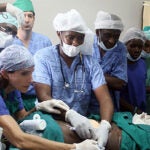 Pain relief for patients in Uganda

A year and a half ago, a pilot program to give rural families affordable water purification had issued 40 dispensers that served 6,000 people in Kenyan villages. Today, more than 400,000 people in Kenya and other countries have access to clean water based on this method.

The approach, which uses an inexpensive chlorine solution and a plastic dispenser that was custom made to distribute doses at communal water sources, was developed by Michael Kremer, Gates Professor of Developing Societies in the Faculty of Arts and Sciences’ Economics Department and a faculty member at the Harvard Kennedy School, Professor of Economics Sendhil Mullainathan, and colleagues at the University of California at Berkeley, the National Bureau of Economic Research, Emory University, and the Bill & Melinda Gates Foundation.

Based on the initial study that concluded a year and a half ago, the Gates Foundation supported the nonprofit group Innovations for Poverty Action to scale up the approach, with Daniele Lantagne, a two-year Georgio Ruffolo Research Fellow in Harvard Kennedy School’s Sustainability Science Program, providing technical assistance. Several local governments in Kenya, along with the ministries of Water, Public Health and Sanitation, and Education, and the nonprofit One Acre Fund have all invested in the approach.

Lantagne, an engineer by training who worked on clean-water issues around the world for 11 years, provided engineering support and worked with local partners on the program’s dramatic expansion. She redesigned the dispenser and its holder to lower cost and increase durability, and worked with local manufacturers to produce and distribute the units to settings around the world.

Along the way, Lantagne has studied how the units are used — or not used — to better understand where they can help. The dispensers now are in Kenya, Haiti, Bangladesh, India, Swaziland, Peru, and Somalia.

In the industrialized world, clean water is often taken for granted. But in settings without water purification and sewage infrastructure, water can become contaminated with feces. That is the biggest cause of diarrheal disease around the world, Lantagne said. Diarrheal disease is the No. 2 killer of children, leading to 1.87 million deaths of those under 5 each year. Around the world, an estimated 2 billion people lack access to microbiologically safe water.

Lantagne came to Harvard with a wealth of experience in this field. She received bachelor’s and master’s degrees in environmental engineering from the Massachusetts Institute of Technology in the late 1990s and early 2000s, and a doctorate from the London School of Hygiene and Tropical Medicine last year. In between, she worked for the Centers for Disease Control and Prevention, traveling to more than 50 developing countries to work on water issues.

Lantagne said she believes it is governments’ responsibility to provide clean water to their citizens, which is the case in the industrialized world. Her efforts are aimed at providing interim relief until governments step in.

“The question is: What do you do when you can’t get infrastructure?” Lantagne said.

Kremer’s initial study investigated the economics and willingness of rural Kenyans to use a widely marketed chlorine solution to disinfect their water. Only 6 percent of people used the solution when the normal price of about 25 cents was charged. But when it was provided for free, a majority of people used it. Kremer then investigated whether chlorination could be provided more cheaply using a larger volume at a communal water source instead of many smaller bottles distributed to homes. The study showed that was the case, Lantagne said.

“Insights from behavioral economics suggested that making water treatment free, convenient, and public through dispensers located at existing communal water sources — and temporary employment of a local promoter — could lead to sustained use at high rates,” Kremer said. “The data suggests that it does.”

Since then, Lantagne has re-engineered the dispensers and their holders to make them more durable and cheaper to manufacture. She traveled not just to the nations where the dispensers are being distributed, but also to China to explore manufacturing techniques. Through these improvements, soon a whole setup will be produced for $25.

Lantagne’s work showed that the dispensers may not be appropriate everywhere, though. They are most useful where people use communal water sources. In places like water-rich rural Bangladesh, families with sources of water in their backyards rarely collect it from a central location.

In addition, her prior work indicated that some cultures, like those in Indonesia, are very sensitive to chlorine’s taste, and so purification methods that rely on boiling or filtration are preferable.

“I don’t think there’s a silver bullet for everything. There are things that work in a particular setting,” Lantagne said.

Kremer said there is a strong economic rationale for governments to cover the cost of treating water to prevent infectious diseases, just as they already subsidize vaccines. He believes that treatment of water is among the most cost-effective ways to prevent child deaths and fight infectious disease.

Lantagne, who will finish her fellowship this spring and take a post as an assistant professor at Tufts University next fall, said that although the toll that dirty water takes on the world’s children is well known, so is the way to solve the problem. Once countries make clean water and fighting childhood mortality from diarrhea a priority, dramatic improvements can occur, as they have in Peru and China over recent decades. If governments around the world decided to tackle this problem head-on, Lantagne was confident it could be quickly solved.

“Where there’s a political will, this is a completely solvable problem within a decade,” Lantagne said.