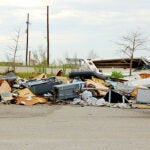 Even in the most remote locations, the buildup of timeless debris grows

On one of the world’s most remote islands, the carcasses of dead albatrosses show how completely humanity has fouled the oceans. Photos of decomposing birds show bones, a ring of feathers, and a pile of plastics — bottle caps, lighters, and other debris — that the birds had ingested, little changed and waiting for the next birds to consume.

The island is Midway, near one of World War II’s most important naval battles and now a quiet backwater where seabirds far outnumber the tiny human population. But Midway’s location near the center of the Pacific Ocean makes the nearby Great Pacific Garbage Patch accessible to the island’s seabirds scouring the ocean surface for food.

The plight of Midway’s birds took center stage Thursday night during a “Trash Talk” in the Geological Lecture Hall, sponsored by the Peabody Museum of Archaeology and Ethnology and co-sponsored by the Harvard Museum of Natural History. Presented by Max Liboiron, regional co-director of the Plastic Pollution Coalition and a graduate student at New York University, the talk was titled “Terrible and Charismatic Waste: A Close Reading of Ocean Plastics.”

Liboiron provided an overview of plastic pollution in the world’s oceans, describing everything from the computer modeling that shows how ocean currents concentrate floating plastics in the middle of the great gyres that stir the seas to the difficulty that scientists have had getting reliable measurements of how much is out there.

The heart of the problem, Liboiron said, is that the oceans are downstream from literally everywhere, so plastic debris ranging from discarded water bottles to stray supermarket bags washes into streams, flows down rivers, and eventually to the sea. There it joins oceanic waste, such as enormous “ghost nets” abandoned by fishermen. And it all floats with the currents.

Because plastic is stable and long-lived, trash made from it that flowed into the ocean decades ago is still there, Liboiron said, swelled by the steadily accumulating streams of the materials. Scientists are concerned about the effects of the accumulating trash, but Liboiron said there remain questions about the quantity and fate of plastics in the ocean.

While the images of dead birds, abandoned fishing nets, and inlets coated with floating bottles provoke a visceral reaction, Liboiron said scientists have had difficulty getting baseline measures of ocean plastics on which to evaluate changes year to year. Trawls performed in different years regularly turn up plastic, even in remote oceanic stretches, but the amount collected varies widely from year to year. Even the effect of ingested plastic on seabirds is debatable, with one study indicating that the plastic itself doesn’t harm the birds, though a belly full of plastic can leave little room for food, Liboiron said.

While the idea of ocean currents concentrating plastics may conjure up images of large, mid-ocean accumulations of floating garbage, the reality is more akin to a “soup” than an island, Liboiron said. Plastics of various sizes are scattered throughout the water column, and some is even co-opted by marine life as habitat, as illustrated by the image of a reef fish living in floating plastic piping far from the nearest reef.

While the precise extent of the problem remains elusive, there’s every indication that we now live on a “plastic planet,” Liboiron said, and that we need to consider how to manage the problem rather than envision a return to pre-plastic days.

Plastic can float for centuries. It doesn’t biodegrade into component materials, but can be broken down mechanically into tiny bits of plastic. It can act to magnify chemical pollution in the seas, since it attracts some types of pollutants, which are passed on to creatures that ingest it. One estimate is that there’s more plastic floating in the oceans today than plankton, the tiny drifting plants and animals that form the base of the ocean’s food web.

Though consumers may want to help, plastic recycling is hampered by the many different kinds of plastics in use today, Liboiron said. That means the problem is largely one that is industrial, fed by debris from transfer stations and the use of long-lived plastics on food and other items that by their very nature are short-lived and disposable. One solution, Liboiron said, would be to eliminate the use of plastics for disposable products, while retaining them for longer-lived household items. Another solution, already in effect in Germany, would be to make companies responsible for their products throughout the products’ life cycles, from production to disposal.