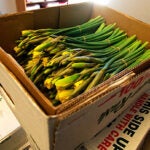 By Office for the Arts Communications

Actor and director Tommy Lee Jones ’69 is the recipient of the 2012 Harvard Arts Medal, which will be awarded by Harvard President Drew Faust on April 26.

The event marks the official opening of Arts First (April 26-29), Harvard’s annual festival showcasing student and faculty creativity, which celebrates its 20th anniversary this year. The award ceremony, presented by the Office for the Arts at Harvard’s Learning From Performers  Program and the Board of Overseers of Harvard College, will be held at 3 p.m. at Sanders Theatre. In a talk moderated by fellow actor and Harvard alumnus John Lithgow ’67, Jones will discuss his life and career.

Revered for his deadpan portrayals of law enforcement/military officers and other authority figures, Jones has received three Academy Award nominations, winning one as best supporting actor for his portrayal of federal marshal Samuel Gerard in the 1993 thriller “The Fugitive.”

Jones’ first film as a director was “The Good Old Boys” in 1995, a made-for-television movie. Recently Jones co-starred with Ben Affleck in the recession drama “The Company Men” and appeared in the film “Captain America: The First Avenger.” His current projects include “Men in Black III,” “Great Hope Springs,” and Steven Spielberg’s “Lincoln,” in which he plays Vice President Thaddeus Stevens.

As an upperclassman at Harvard, Jones shared a room in Dunster House with Al Gore. Jones appeared in undergraduate theater productions, notably with John Lithgow in Christopher Fry’s “The Lady’s Not for Burning,” in 1967. Offstage, Jones played offensive tackle on Harvard’s undefeated 1968 varsity football team and was nominated as a first-team All-Ivy League selection. Jones played in the memorable 1968 game in which Harvard made a last-minute 16-point comeback to tie Yale. He recounts his memory of “the most famous football game in Ivy League history” in the documentary “Harvard Beats Yale 29-29.” Jones graduated cum laude from Harvard with a bachelor of arts in English in 1969.

Admission is free but tickets are required (limit two per person), available through the Harvard Box Office at Holyoke Center beginning April 17. Some remaining tickets may be available at the door one hour prior to event start time. For more information, call 617.496.2222 (TTY, 617.495.1642).