The search for life’s stirrings 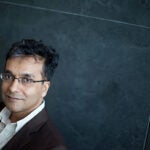 Scientists studying how life arose on Earth are stumped by several key steps in that eventual process, but a Harvard scientist studying the earliest cells says that seemingly intractable problems in this field have sometimes proved to have simple, even elegant solutions.

Those pondering the earliest stirrings of life expect that it will either turn out to be easy to create and a natural outgrowth of the primordial conditions found on planets like Earth: rocky, not too hot, not too cold, with water and other key elements. If that’s the case, the rapid acceleration of discoveries of extrasolar planets would mean there are potentially millions of other worlds that are Earth-like enough for life to arise.

Or, life may be hard to get going, requiring a precise combination of conditions and chemicals that were present on Earth, perhaps fleetingly and only once. If that’s the case, such conditions may be difficult to locate in other places, and we may find ourselves in thin company — or even entirely alone — in the universe.

So far, researchers have run into one knotty problem after another. But Nobel laureate Jack Szostak, a genetics professor at Harvard Medical School, and distinguished investigator at Harvard-affiliated Massachusetts General Hospital, said Feb. 1 that we shouldn’t interpret the difficulty of the problems so far to mean that life is most likely rare in the universe.

“At this stage in our thinking, there are a lot of gaps in our understanding, places where we have no idea what happened,” Szostak said. But “problems that looked so intractable in retrospect look simple.”

Szostak, who won the 2009 Nobel Prize in physiology or medicine, spoke at the Harvard Museum of Natural History in the kickoff lecture of the season’s “Evolution Matters” series. Szostak gave a packed Geological Lecture Hall an overview of the work of researchers like himself who are seeking to answer life’s most fundamental question: Where did we come from?

Szostak’s research focuses on understanding primitive cells, how they might have been created, and how they might have behaved and divided. Among other findings, Szostak and colleagues have shown that cell-like vesicles are relatively easy to create from fatty acid molecules suspended in water. He has also shown that vesicles divide naturally when passed through a smaller pore, and explored other possible methods of early cell division.

One of the early problems researchers in this field faced was how genetic information in the first cells was transmitted. The way cells work today, Szostak said, is that the information in DNA is taken by RNA and used to create a vast array of proteins, which do much of the body’s work. This DNA-to-RNA-to-protein process feeds back on itself, with proteins playing key roles in creating RNA from DNA. Scientists found such a closed loop difficult to unravel: With no proteins in an early cell, how do you get the DNA’s information out to create RNA and then more proteins?

That changed in the early 1980s, when researchers discovered that RNA, in addition to having the ability to carry genetic information, also can catalyze chemical reactions, something thought to be the domain of proteins. The discovery gave rise to the possibility that early cells held their genetic information not in DNA, but in RNA molecules, as some viruses do today, and that RNA, not proteins, could have played a role in catalyzing the cellular processes. The problem changed from needing three kinds of molecules that interacted in complex ways to needing just one kind.

While that presented a plausible scenario, many details remain problematic. Two of them, it turns out, are solved with a single solution, Szostak said. One issue is that when two RNA molecules are joined to form a double helix, pulling them apart to get at their genetic information is very difficult without using cellular enzymes, which wouldn’t have been present in early cells.

The second problem is that the molecular backbone occurring in RNA that is created through chemical processes like those possible on early Earth is not the same as that manufactured inside cells. When cells make RNA, the molecular backbone bonds with different atoms at specific locations. When RNA is made through primitive chemical processes, there is more sloppiness, with atoms attached in the wrong spot in some cases.

Both seemed intractable problems, Szostak said. But when members of his lab replicated the situation, evolving an RNA molecule through chemical processes, they realized that instead of being a problem, the sloppiness in the backbone was actually a solution. A few misplaced atoms didn’t affect the whole RNA molecule’s structure, and with those atoms out of place, it didn’t bond quite as strongly to another RNA molecule, allowing them to come apart more easily and letting replication proceed, solving the first problem as well.

“Instead of being a fatal problem for RNA, we now think that backbone heterogeneity may be what allowed RNA to emerge as primordial genetic material,” Szostak said. “Our thinking on this problem is just completely inverted.”