The magic of beanbags 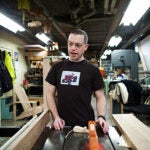 The summer before they started at Harvard, high school friends Joe McCormick and Jamie Dickerson drove to Home Depot to buy plywood. “We decided to build cornhole boards,” recalled McCormick, now a sophomore and an engineering sciences concentrator.

Cornhole, also known as beanbag toss, at its simplest involves two to four players throwing beanbags through holes fashioned into opposite-facing slanted boards. Using guidelines provided by the American Cornhole Association (ACA), McCormick said, “We spent a night building this board to ACA specs, and my sister sewed together bags with sand and some sort of pink beans we found at the grocery store.”

The two played all summer in their hometown of Melrose, Mass., painted the boards with the Harvard seal, and brought them to campus to start their freshman year.

They began researching how to start a Harvard club sport. But paperwork issues befell them freshman year, so the unused boards were put to utilitarian use: The slanted end was propped on a stool to form a makeshift coffee table, and the hole was sized perfectly to hold a bowl of snacks.

Cornhole debuted as an official club sport last spring, with McCormick as president.

“What’s great about the sport is that it’s really easy to pick up, and it’s really relaxing,” said club member and applied math concentrator Harry Chiel ’14.  “I think the relaxing point is one of the reasons we play. You can be enjoying the nice day outside and doing a fun activity that is somewhat competitive and fun but also doesn’t require a lot out of you.”

The club practices Monday nights in the Malkin Athletic Center. “We’ve had a varied turnout, but we’re hoping to expand and get the word of cornhole out in the Harvard community,” said Dickerson, a government concentrator.

One of the ways the club is improving visibility is by doing charity events. “We partnered with Relay for Life and did an event in front of the Science Center called ‘Cornhole for Cancer,’ ” said McCormick.

“We’re planning to do a big tournament, have a lot of people enter, and use the money for Joe’s charity,” said club member and economics concentrator David Mazza ’14.

McCormick is legally blind because of an ocular disease called Leber’s hereditary optic neuropathy. “My disease is very rare, only 100 cases a year, so we’re hoping to raise money for research efforts,” he said.

Armed with funding from Harvard, the club purchased new boards and bags from — where else — www.cornhole.com. The stark white boards are ready to be decorated and utilized.

But with these guys advocating the sport, the future of the cornhole club looks promising.

“A couple freshmen came earlier this year, and they seem to like it a lot, so if we get more kids who really enjoy it, they can stick with it after we graduate,” said Mazza.

“There’s a lot of strategy because you can’t go over 21 points, so it’s a thinking game as well as an active game,” said Dickerson.

“It’s kind of like a carnival game. You’re throwing a beanbag through a small hole, and that’s attractive to people,” said Chiel.

Echoed Chiel: “It can get pretty dramatic.”