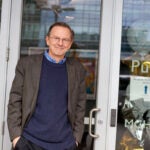 The search for life’s stirrings

Study finds patients wait longer than they should

The vast majority of patients with incurable lung or colorectal cancer talk with a physician about their options for care at the end of life, but often not until late in the course of their illness, according to a new study by Harvard-affiliated Dana-Farber Cancer Institute investigators published in the Feb. 7 issue of the Annals of Internal Medicine.

The researchers found that such belated conversations tend to occur under particularly stressful conditions — when patients have been admitted to a hospital for acute care. And the doctor who shares in the end-of-life care talk is often a hospital physician rather than an oncologist who has treated the patient for much of his or her illness.

Together, these circumstances may deprive patients of the opportunity for extended reflection and deliberation that would have been possible months earlier, when the conversation also could have occurred under less trying and hectic conditions, the authors suggest.

“Previous studies have shown that patients who discuss their end-of-life care preferences with a physician are more likely to choose palliative, comfort-focused care over aggressive measures, and [to] receive hospice or other care consistent with their wishes. But studies haven’t looked at the timing of these discussions, or where and with whom they occur,” says the study’s lead author, Jennifer Mack of Dana-Farber/Children’s Hospital Cancer Center. Mack is also an assistant professor of pediatrics at Harvard Medical School (HMS).

The new study, which involved 2,155 patients with stage IV (highly advanced) lung or colorectal cancer, found that 73 percent of the patients had a conversation about end-of-life care with a physician, according to medical records or an interview with the patient or a companion. Among the nearly 1,000 patients who passed away and whose records document an end-of-life care discussion with a physician, the median time of those discussions was 33 days before death.

Other findings pertain to the location of those discussions and the type of physician involved. Of the more than 1,000 end-of-life care discussions in medical records, 55 percent occurred in the hospital. Oncologists documented end-of-life care talks with only 27 percent of their terminally ill patients in the study.

Data for the study was provided by the Cancer Outcomes Research and Surveillance Consortium (CanCORS), a multi-region, population- and health system-based study of more than 10,000 patients with lung or colorectal cancer. Researchers interviewed patients at two time points and analyzed their medical records 15 months after diagnosis.

“It’s encouraging to see such a high percentage of patients had end-of-life care conversations with a physician,” Mack says. “There’s a concern, though, that so many of these talks are taking place late in the trajectory of the disease.”

Previous studies had estimated that fewer than 40 percent of patients with advanced cancer had end-of-life care discussions. Mack theorizes that this lower figure may reflect that earlier studies didn’t record end-of-life talks that took place shortly before patients’ death.

Other research has suggested that physicians may delay end-of-life care discussions because of a natural reluctance to broach the subject, or because it conflicts with physicians’ problem-solving, hope-giving image. While such motivations are understandable, Mack says, they may work to patients’ detriment if they postpone the conversations too long.

Mack and her colleagues are planning future studies to examine the quality and content of end-of-life care conversations, and then explore whether having such talks earlier in the course of illness can benefit patients.

The study’s senior author is HMS Professor of Medicine Jane Weeks of Dana-Farber. Co-authors include Angel Cronin and Nathan Taback of Dana-Farber; Haiden Huskamp and Nancy Keating of Harvard Medical School; Jennifer Malin of the University of California, Los Angeles; and Craig Earle of the Ontario Institute for Cancer Research.

The study was funded by grants from the National Cancer Institute, the U.S. Department of Veterans Affairs, the American Cancer Society, and the National Palliative Care Research Center.