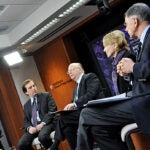 Fears of bioterrorism or an accidental release

One in 10 children face elevated risk of abuse, future PTSD

Children in the U.S. whose activity choices, interests, and pretend play before age 11 fall outside those typically expressed by their biological sex face increased risk of being physically, psychologically, and sexually abused, and of suffering from post-traumatic stress disorder (PTSD) by early adulthood, according to a new study led by researchers at Harvard School of Public Health (HSPH). It is the first study to use a population-based sample to look at gender nonconformity as a risk factor for abuse.

The study was published online Feb. 20 and will appear in the March 2012 print issue of Pediatrics.

Parents need to be aware that discrimination against gender nonconformity affects one in 10 kids, affects kids at a very young age, and has lasting impacts on health. — Andrea Roberts

“The abuse we examined was mostly perpetrated by parents or other adults in the home. Parents need to be aware that discrimination against gender nonconformity affects one in 10 kids, affects kids at a very young age, and has lasting impacts on health,” said lead author Andrea Roberts, a research associate in the Department of Society, Human Development, and Health at HSPH.

PTSD has been linked to risky behavior such as engaging in unprotected sex, and also to physical symptoms such as cardiovascular problems and chronic pain.

The researchers, led by Roberts and senior author S. Bryn Austin, associate professor in the Department of Society, Human Development, and Health at HSPH, and in the Division of Adolescent and Young Adult Medicine at Harvard-affiliated Children’s Hospital Boston, examined questionnaire data gathered from nearly 9,000 young adults (average age 23) who enrolled in the longitudinal Growing Up Today study in 1996. Respondents were asked in 2007 to recall their childhood experiences, including favorite toys and games, roles they took while playing, media characters they imitated or admired, and feelings of femininity and masculinity. They also were asked about physical, sexual, or emotional abuse they experienced and were screened for PTSD.

More research is needed to understand why gender nonconforming kids experience greater risk of abuse, and to develop interventions to prevent abuse, the researchers said. They recommend that pediatricians and school health providers consider abuse screening for this vulnerable population.

Funding for the study was provided by the National Institutes of Health.