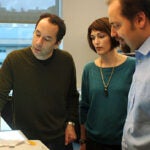 Harvard researchers believe it may be vulnerable to anti-angiogenic drugs

Scientists at Harvard-affiliated Dana-Farber Cancer Institute have identified a subtype of ovarian cancer able to build its own blood vessels, suggesting that such tumors might be especially susceptible to “anti-angiogenic” drugs that block blood vessel formation.

In a study published in the online journal PloS ONE, the investigators estimate that the subtype may account for a third of all serous ovarian cancers, a common cancer of the surface of the ovaries. The discovery of the subtype, made by analyzing data from the clinical records of more than 1,500 serous ovarian cancer patients and samples of their tumors, may spur clinical trials to determine if patients with the subtype can benefit from anti-angiogenic therapies now being tested in other cancers.

“Unlike breast cancer, where we can distinguish different subtypes based on their genetic signatures, ovarian cancer has been viewed as a monolithically homogenous disease — each tumor very much like every other,” says John Quackenbush, the study’s co-senior author with his Dana-Farber colleague Ursula Matulonis. “With this study, we’ve shown that serous ovarian cancer exists in at least one distinct subtype at the molecular level, raising the possibility that it will be vulnerable to therapies directed at its molecular weaknesses.”

Ovarian cancer is the fifth-leading cause of cancer death for women in the United States, responsible for more than 15,000 deaths annually in this country, according to the American Cancer Society. High-grade serous ovarian cancers — the focus of the current study — are one of several varieties of tumors that appear in the “epithelial” tissue lining the ovaries. Epithelial tumors account for about half of all ovarian cancers. (“Serous” refers to tumors that are found in tissues that produce a serum-like fluid. “High-grade” refers to the highly abnormal appearance of the tumor’s cells under a microscope.)

Although many ovarian cancers initially recede or grow more slowly when treated with conventional, platinum-based chemotherapy drugs, the vast majority overcome that tendency and begin to grow again.

In the current study, researchers scanned the activity of thousands of genes in high-grade serous ovarian cancers from 129 patients with an advanced stage of the disease. They then sifted the data using an algorithm called rISIS, which randomly assigns the tumor samples to different groups until it finds a grouping with a distinct set of genetic characteristics. That grouping represents a potential cancer subtype.

The technique yielded four possible subtypes of high-grade serous ovarian cancer, but only one of them held up when researchers applied a different technique for scanning gene activity. When researchers cataloged the genes that were particularly active — or “highly expressed” — in that single subtype, a key trend appeared: Many of the genes were known to be involved in angiogenesis, the process by which tumors build blood vessels to tap into the bloodstream for oxygen and nutrients. This distinctive array of overactive genes was dubbed the “angiogenesis signature.”

A common shortcoming of gene-profiling studies is that the results often aren’t reproducible: Different labs obtain different gene signatures for the same types of cancer. To ensure their findings were not skewed by their lab procedures or testing methods, the Dana-Farber investigators analyzed data from 10 published, independent studies of gene expression in serous ovarian cancer. Together, these studies involved 1,606 ovarian cancer patients.

“The analysis confirmed our finding,” said Quackenbush, a professor of computational biology and bioinformatics at the Harvard School of Public Health. “The angiogenic [blood vessel-producing] subtype is real.” When investigators analyzed the medical records of those 1,606 patients, they found that those with the angiogenic subtype tended to have more-advanced, aggressive tumors than those without the subtype.

A clinical trial will be necessary to determine if angiogenesis-blocking drugs are particularly effective in patients with the angiogenic subtype. But there is reason for optimism: About 30 percent of serous ovarian cancer patients who receive angiogenesis inhibitors in a clinical trial benefit from the drugs; and the angiogenic subtype comprises about 30 percent of all serous ovarian cancers. “It is a test like this that may in the future help us select which patients will benefit most from a drug like Avastin,” says Matulonis, an associate professor of medicine at Harvard Medical School.

The researchers believe that their classification of this new subtype has great potential to influence the treatment many patients receive and improve outcomes for a significant number of people with this disease. “The approach we’ve taken in this study offers a powerful way of identifying molecular subtypes of other cancers as well,” says Quackenbush.

The study was supported by the Dana-Farber Cancer Institute Women’s Cancer Program, the Strategic Plan Fund, and the Madeline Franchi Ovarian Cancer Research Fund at Dana-Farber.