Neighbors for the 21st century 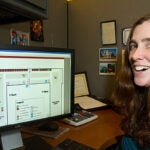 As times change, a welcoming program evolves, too

Neighborliness is something of a dying ideal these days, a once-cherished quality that most overworked, hyperconnected Americans now scarcely have the time to embrace. In one corner of the University, however, the dedicated group of volunteers who run Harvard Neighbors is proving that the concept is alive and well — and that the definition of a neighbor extends well beyond the house next door.

What started in 1894 as a prim club for faculty wives has evolved into one of the least exclusive, most eclectic social organizations at Harvard. Faculty, staff, visiting scholars, fellows, postdocs, and retirees may join, along with their spouses or partners. The group currently has nearly 300 dues-paying members. (Graduate students and their families have their own support network, the Harvard Students’ Spouses and Partners Association.)

“People may consider this an old-fashioned organization, but I believe it has and continues to serve the University well,” said Jacoba von Gimborn, Harvard Neighbors’ director since 1998. “The goal is simply to make people say, ‘I was at Harvard, and it was a really good experience.’ ”

While that mission has remained the same over the years, von Gimborn stressed, Harvard Neighbors has evolved to serve it as the needs of the Harvard community have changed. As Harvard has become more diverse, so have Harvard Neighbors’ offerings. Daytime playgroups for international parents, evening lectures by faculty, weekend outings to art galleries or apple orchards: If it can be done in a group, Harvard Neighbors likely hosts it.

“We’re here to provide what people need,” von Gimborn said. “Maybe in the 1950s and ’60s, that was a cocktail hour. Maybe in the 19th century, it was an afternoon tea.

“Now,” she added, looking around the organization’s cozy, multipurpose space in the Loeb House basement, “it’s this.”

As Harvard has become more international, so has Harvard Neighbors. In recent years, the group has been an invaluable resource for the University’s immigrant community, including visiting researchers or fellows and their significant others. One recent afternoon, a meeting of an English conversation practice group drew a gaggle of fellows and spouses from Poland, Japan, South Korea, Russia, and Israel.

“I [wanted] to meet people in the same situation as me, because my fiancé works a lot,” said Agnes Ebinger, who emigrated from Warsaw in January for her fiancé’s job at Brigham and Women’s Hospital. While she plans to take courses at Harvard Extension School, she wanted a chance to practice her English in a more relaxed setting, she said.

Insung Hwang, a visiting scholar in the East Asian Legal Studies Program at Harvard Law School (HLS) and a judge in his native South Korea, found that the meetings offered a casual atmosphere he wouldn’t find in an English-as-a-second-language class. The one thing the group lacked? Male camaraderie.

“It’s very difficult to be one man among so many women,” he joked good-naturedly to his all-female conversation group.

Harvard Neighbors began to expand in the early 1970s, when Sissela Bok, wife of President Derek Bok, undertook the task of modernizing the organization. Bok created a system of neighborhood networks, spreading out to towns like Belmont and Arlington to hold “coffee-klatches” for Harvard families, von Gimborn said.

While volunteers no longer show up at new members’ homes with trays of cookies, that welcoming spirit is still very much alive, its members stressed.

When Will Doss Suter joined the University Planning Office in 2010, a colleague suggested he look into Harvard Neighbors. “At first I was confused, since I don’t live in Cambridge, let alone near the campus,” said Suter, an urban design planner who is now a board member. “But I think the name actually captures part of what’s great about Harvard Neighbors. We’re surrounded by a community of talented individuals from around the world, but all too often only interact with those in our immediate vicinity, department, or field.”

The organization relies heavily on volunteers, who serve as board members, organize events, or lead interest groups ranging from a German book club to an outdoor excursions group. (Von Gimborn is the only paid staff member.) Volunteers are especially crucial in welcoming new members from abroad; in some cases, they’ve even taken newcomers to the region on shopping trips for proper winter coats, von Gimborn said.

“It’s almost like a welcoming committee for Harvard,” said Scott Cipolla, a staff assistant at the Peabody Museum who leads the popular interest group Adventures in Art, which takes members on tours of area galleries and museums. “It offers people a chance to come, and they speak their own language, so they have the camaraderie of being in this strange land together.”

Harvard Neighbors is also a haven for the University’s sizable underground art community, said Mary Lancaster, a sculptor and senior financial manager at the Joint Center for Housing Studies. For more than 30 years, Harvard Neighbors has showcased staff artists’ work, including Lancaster’s, turning the Loeb House meeting room into a de-facto art gallery.

“There seems to be a yearning [among staff] for more opportunities to meet other artists or to perform or display their art,” Lancaster said. “But it’s hard to connect that interest with actual opportunities. Harvard Neighbors fills an important piece of that puzzle.”

It’s not easy being a catchall club in the social-networking era, when it’s now easier than ever to find others who share one’s niche interests, von Gimborn said. But Harvard Neighbors’ enduring presence on campus proves that the desire for community persists, even in the Internet age.

“People will use Facebook or the Internet, but they still want to meet people face-to-face,” she said. “We try to offer that connection, especially in a world that can be harsh at times. I think people miss that.”