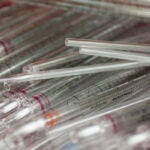 To biophysicist Aravinthan Samuel, the roundworm Caenorhabditis elegans provides a pathway to understanding the brain and nervous system, first of the worm, then of higher animals, and even, perhaps, of humans.

But to Samuel, working on anesthetized or immobilized worms can only tell you so much about how the brain and nervous system work. To truly understand the system, researchers need to see it in action.

So Samuel and researchers in his lab set to work designing equipment that could measure nerve activity in living, wiggling worms. They first succeeded three or four years ago, becoming the first to record neural activity in freely moving worms. Then, last year, they topped that, using pulses of green and blue light on worms that had been genetically modified so that their nerves contained light-activated proteins. This allowed researchers to exert control over the worms by aiming pulses of light at specific nerves.

To do this, they had to design some sophisticated equipment: a tracking microscope to follow the worms’ movements and image-processing software to estimate the location of individual neurons and control a mirror to direct light to the target nerve cells.

At the time, Samuel described the method as perhaps his lab’s “greatest invention” and said it would provide a new tool in the arsenal of researchers seeking to understand the nervous system.

Today, Samuel and members of his lab are moving ahead with their work on the roundworm. Samuel, a physics professor who uses the tools of that field to explore important biological questions, said he chose to work on C. elegans, a millimeter-long roundworm often used in laboratory research, for several reasons. It is transparent, so researchers can see what’s going on inside it, and it’s so simple that researchers have all of its 302 neurons mapped out. That means researchers seeking a beachhead from which to explore the complex workings of the nervous system can look for basic principles in C. elegans that would also apply to more complex creatures.

After years working on C. elegans, Samuel’s laboratory is tackling increasing complexity. A few years ago, the researchers began working on larva of the fruit fly Drosophila. While Drosophila is another commonly studied laboratory animal — favored for genetics research because of its short life span — it is usually studied in its adult fly form. Its wormlike larva, which Samuel said has a nervous system an order of magnitude more complex than C. elegans, is not as widely studied. One project, if successful, will yield a complete map of the nerves involved in the larvae’s sensitivity to light and heat.

Although he has been on Harvard’s faculty since 2003, Samuel has been at the University far longer, for 23 years. After growing up in Sidney, New York with an interest in mathematics and physics, Samuel came to Harvard as an undergraduate. While looking for laboratories where he could conduct biological or physics research, he visited the lab of Howard Berg, a biophysicist who studies movement in bacteria. Samuel found a home there, conducting both undergraduate and graduate studies under Berg.

“Everything he touched seemed to work. He roamed and read widely. At one point he was learning Japanese … and reading James Joyce,” Berg said. “We are lucky to have him here.  He is working at the interface of physics and biology and needs the support of both communities.”

Samuel said he was attracted to Berg’s lab — and biophysics generally — because so many fundamental biological questions remain unanswered that he felt there were ample opportunities to conduct basic research.

“You can do fundamental work quickly. That’s not so easy to do in physics,” Samuel said.

Over his career, Samuel has come to understand what he calls the “inefficiencies” in science, the research down blind alleys that can consume a lot of effort but yield no results. As the leader of his own lab, Samuel said he tries to touch base with each lab member daily instead of waiting for lab meetings, to head off forays down paths that won’t prove fruitful.

“I try to make sure everyone is working on solvable problems,” Samuel said.