In the end, Somali famine preventable 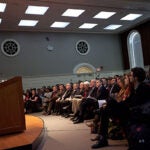 The United Nations declared last Friday that Somalia’s famine is over. But the official declaration means little to the millions of Somalis who are still hungry and waiting for their crops to grow, according to authorities gathered at Harvard University.

“The difference between famine versus not famine for most Somalis is a distinction without a difference,” said Ken Menkhaus, professor of political science at Davidson College, whose research focuses on Somalia and the Horn of Africa.

Menkhaus said it was profoundly disappointing to be discussing another Somali famine, after he worked in the country during the 1991-92 one. Each famine, he said, has distinct characteristics, and this one unfolded in slow motion over the past couple of years. That’s at least partly because the Somali diaspora sent money home that delayed the worst effects.

Menkhaus was among four experts on Somalia and famine who spoke at the Radcliffe Gym Monday evening. The event, “Sound the Horn: Famine in the Horn of Africa,” was sponsored by the Committee on African Studies, Harvard Medical School’s Program in Infectious Disease and Social Change, the Weatherhead Center for International Affairs, and the Harvard Undergraduate Council.

The event was introduced by Paul Farmer, Kolokotrones University Professor of Global Health and Social Medicine and co-founder of the nonprofit Partners In Health. It featured opening remarks by Caroline Elkins, history professor and chair of the Committee on African Studies, and Salmaan Keshavjee, assistant professor of medicine and director of the Program on Infectious Disease and Social Change.

Other speakers included Michael Delaney, director of humanitarian response for Oxfam America, William Masters, chair of the Department of Food and Nutrition Policy at Tufts University, and Robert Paarlberg, adjunct professor of public policy at the Harvard Kennedy School and a political science professor at Wellesley College.

Elkins said the event was part of a University-wide effort to respond to the Somali disaster. Harvard President Drew Faust sent a message that Elkins read to the audience. Faust said the crisis deserves the world’s attention in an era when it is easier than ever to be informed about any subject, but perhaps harder to be aware of what’s important.

Farmer drew on his experience treating malnourished people in Haiti, where he has worked for decades, and said the human and social context of hunger need as much attention as the patients do. A malnourished child is typically an indication of poverty at home, and aid to families should be part of treating the child, he said. Similarly, broader agricultural interventions and fair trade policies are needed to boost local agricultural economies.

Though famine is often thought of as a natural disaster, Monday’s speakers said that is a false impression. Though Somalia suffered through a severe drought, with today’s instant communications, transport systems can move massive amounts of food. Given today’s global food markets, famine is too often a failure of local government and international response.

“In today’s 21st-century world, just about everything about famine is man-made,” Paarlberg said. “We’re no longer in a world of man against nature.”

Paarlberg’s assertion echoed that of other speakers, who pointed out that several of the most deadly famines in history occurred because of government action or inaction.

Ethiopia, which was also affected by the recent drought, fared much better this time because of reforms implemented after the 2001 one. Likewise, Paarlberg said, northern and central Somalia, regions that fall outside of the influence of the Al-Shabaab militia, also fared better.

There were several man-made features of this famine, which affected more than 10 million people and killed between 50,000 and 100,000, half of them children under age 5.

The largest man-made feature was the role of the Al-Shabaab militia that rules the region and that kept food aid from reaching those in need. But the international community isn’t blameless. As early as November 2010, an international famine early warning system was predicting the failure of rains in the region, but the international community didn’t respond fully until an official famine was declared in July 2011. On top of that, U.S. anti-terrorism laws cut off food aid because Al-Shabaab, listed as a terrorist group, was taking some of it.

Though the United Nations has declared the famine over, that was based on statistical measures, such as the number of people dying each day and the number of children who are malnourished. Though the official famine may be over, both U.N. officials and Monday’s speakers said the crisis continues for the people of Somalia. Almost a third of the population remains dependent on humanitarian assistance, crops growing from recent rains will take months to reach maturity, and herds of cows, goats, and other animals were greatly reduced during the crisis.

Delaney warned that the world will have another chance to get its response right, because the warning signs are pointing to an impending famine in Africa’s Sahel, the arid, continent-spanning transition zone just below the Sahara Desert.