Ideas to improve the everyday 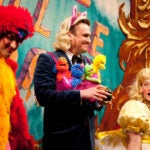 A welcome for Man of the Year

The student-organized event that aims “to bring big ideas back to the center,” according to co-founder Peter Davis ’12, took on the trappings of permanence with T-shirt sales, live-streaming online, a big-screen Tweet display, and on-stage interludes by The Nostalgics, a student band. Although students were not queued up in the cold like last year, thanks to a better ticketing process, members of the Harvard University Band played outside Sanders Theatre before the show, lending a festive air.

The short-course format harks to the example of the TED talks, the online sensation created 28 years ago by a nonprofit to foster exchange of the latest thinking on technology, engineering, and design by cutting-edge thinkers.

While many of the eight faculty speakers in the third “Harvard Thinks Big” prodded the student audience to think deeply about how to solve major national and global issues, Kaia Stern, a lecturer in ethics at Harvard Divinity School, implored them to “act big.”

She urged students to think of the one in 31 Americans behind bars or on parole or probation, according to a Pew Center study, and to tackle the accelerating rate of imprisonment in the United States, which she said has a higher incarceration rate than Russia, Iran, Iraq, Canada, Australia, Brazil, and Mexico combined.

Stern, who also is affiliated with the African and African American Studies Department and teaches sociology to inmates at the Norfolk and Framingham state prisons, said the surge in mass imprisonment in America is everyone’s problem.

“For as long as we tolerate poverty and live in fear, Americans are complicit in the cycle of crime,” she said.

Douglas A. Melton, a leading light in stem cell research, urged the audience to consider a different context for what it means to be human. He offered a clear, concise explanation of stem cells and how they are important because they can self-renew, make exact copies of themselves, and specialize.

Melton, who is co-director of the Harvard Stem Cell Institute, was inspired decades ago to focus on stem cell research for the pancreas following the diagnosis of two children with type I diabetes. He said the goal is to find the switch that inhibits stem cell growth. He showed a slide of a heavily muscled bull that had just kept growing muscle because the inhibitors to muscle cell growth had been turned off.

Melton proposed using modern recombinant DNA biology — which is being applied to crops to make them disease- and insect-resistant — to grow foods that stimulate the growth of desirable stem cells.

Evolutionary Biology Professor Daniel Lieberman zeroed in on the problem at the core of many diseases: runaway obesity. By 2015, he said, there will be 3 billion obese adults, largely because we have evolved over a relatively short period of industrialization to crave sugar, fat, and salt.

“The message of Michelle Obama’s ‘Let’s Move’ program is drowned out by the $2 billion spent to market unhealthy food to children,” he said.

Lieberman, who chairs the Human Evolutionary Biology Department, said the cascading effects on human health and medical costs are so catastrophic that government should require exercise just as it mandates vaccinations and other public health measures.

The trend has been negative even at Harvard, which had a physical education requirement of four hours a week from 1920 to 1970.

“Instead of thinking big, maybe we should think small and require physical education again,” Lieberman said to hearty applause.

Medical Sociology Professor Nicholas Christakis told the Web-savvy students that actually social networks have been vibrant and important to human happiness for thousands of years. Christakis’ research has been the topic of two TED talks and earned him a place as one of the most influential thinkers in Time 100. He talked about how happiness has been mapped as something that travels among associates in a network.

“It is the ties between people that make the whole greater than the sum of its parts,” said Christakis.

History professor and New Yorker staff writer Jill Lepore described how the goals of life changed in iterations of the board game of “Life” from the time that Harvard dropout Milton Bradley developed “The Checkered Game of Life” in 1860 to present-day products. And Harvard Graduate School of Education Professor Eleanor Duckworth discussed how teaching is best when it’s about “helping people learn rather than telling people what you know.”