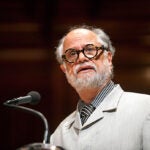 A carrel can be many things to a harried thesis-writer or researcher: a distraction-free oasis, a handy personal storage unit, or, as deadlines draw near, a veritable campsite. No one understands the stakes of obtaining a prime library study enclosure better than Ann-Marie Costa, who doles out carrel assignments at Widener Library.

But until recently, assigning those desks was an arduous, paper-based process, one that left students submitting preferences and hoping for the best. Convinced there could be an easier way, Costa oversaw creation of an online application that makes picking the perfect nook as simple as selecting a seat on a flight through an airline website.

Inscriptio was launched with support from the Harvard Library Lab, an innovation-minded program for University librarians, this past fall. Now, any qualified researcher seeking a carrel in Widener can simply log in and view a map of 300 choices, with vacancies updated in real time. It’s an elegant solution that lets patrons focus on the how of their research, rather than the where.

“This just seemed like a universally good idea,” said Costa, head of billing and privileges for Widener and Lamont libraries.

While some scholars and students rarely use their carrels, others occupy them with a fanatical zeal. After all, libraries are where serious studying happens, and Widener in particular has a reputation for fostering concentration.

“A lot of people use the library as a space to up their game,” said Cheryl McGrath, head of access services at Widener, who first proposed the idea for an online carrel system to Costa. “The space defines your mental state; it creates that research atmosphere.”

Carrel-seekers’ preferences can be finicky. Many researchers prefer to be near the stacks that they plan to frequent, while others simply want a spot in a quiet or well-lit area.

Before Inscriptio, “people would come down [to the desk] and say, ‘I’d like a carrel that’s near the bathroom and faces the south-side windows, and I’d like there to be sunlight from 1 to 2,’ ” Costa said with a laugh. “It was almost like selling real estate.”

Inscriptio also aims to minimize scheduling conflicts among scholars who must share carrels, a common occurrence. Its bulletin board feature allows students to upload their schedules and work out their hours.

“It takes the staff out of the mix and allows the carrel holders to work out any issues directly with one another,” Costa said, adding that she and her staff are always available to mediate the occasional heated dispute.

Inscriptio has been a boon not just to stressed-out students and faculty, but to library employees as well. Widener estimates that the switch to an online system has saved Billing and Privileges five weeks’ worth of man-hours.

“The paper’s gone, the Excel spreadsheets are gone, even the carrel cards are gone,” Costa said.

Costa is quick to acknowledge that the project was a collaborative effort, involving developers from the Berkman Center for Internet & Society and many other members of the Widener staff, who helped with everything from designing graphics to providing feedback on the user experience. “I was just here making sure we were all talking and figuring out what needed to happen,” she said.

That kind of teamwork and idea sharing has become essential as the Library Transition — a reorganization of Harvard’s 70-plus individual libraries — gets under way, Costa said. “Knowing that things are going to change — I think that’s a real prompting to get out there and work with everybody. Being in our respective silos is no longer an option.”

Costa’s leadership on Inscriptio garnered her a Harvard College Library Excellence in Service Award in November. It was her second honor in as many years; in 2010 she received the Faculty of Arts and Sciences Dean’s Distinction award.

“She’s an excellent listener, and she really offers hospitality,” McGrath said of Costa’s work with patrons on billing and access issues. “She realizes that some of our patrons have come sometimes thousands of miles to do research that can only be done here.”

So far, Inscriptio has proved a success. It will soon be piloted at other Harvard libraries, and representatives from Yale recently visited Widener in the hope of acquiring it for use in their library system.

Still, Costa is the first to admit not everything at Widener can be computerized.

“We’re the first people scholars and students see when they come in,” she said. “People will always have questions, will always want to talk things out with a real person. You can’t replace that.”