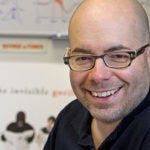 Everything — from noxious chemicals found in cigarette smoke or car exhaust, to ultraviolet radiation from the sun, to even something as benign as oxygen — is working overtime to damage DNA. Fortunately, all living things have a defense: an intracellular mechanic that patrols DNA, searching for errors and repairing them, thousands of times a day.

Using X-ray crystallography, Harvard scientists produced 3-D images of the protein machinery that detects damaged parts of the genome in bacteria, thus enabling them to be repaired. The Harvard group used the images they obtained to gain a new understanding of how the DNA repair process works.

As reported in the online version of Nature Structural & Molecular Biology on Feb. 5, the images reveal that the proteins can actually alter their shape. Researchers believe that the alteration is part of a process best described as a genetic “pat-down,” or a way for the mechanism to identify areas of the genetic code that need repair.

“What we think is that the sensor detects regions that require repair by subjecting DNA to a stress test,” David Jeruzalmi of Harvard’s Department of Molecular and Cellular Biology and lead author of the paper, said. “As it patrols, one form of the sensor can interact with both native and damaged DNA, but only normal DNA is able to pass the stress test. The sensor performs these stress tests over and over; regions of the genetic code that pass the test are quickly released. However, once a region of DNA is found that fails the “pat-down,” or stress test, the sensor gets stuck and signals for other biochemical processes to take over and repair the DNA.

“We were really excited to see the 3-D image of the sensor, because this amazing insight is something that could never emerge from studying these proteins biochemically,” Jeruzalmi added. “You needed to have seen the two views. This is totally unprecedented — there was nothing in any previous study that suggested that something like this was occurring.”

The DNA repair machinery is made up of two pairs of proteins: UvrA and UvrB. Although earlier work had shown that the proteins could be arranged into an open, almost butterflylike form, Jeruzalmi’s recent paper found them arranged in a tighter, sleevelike pattern, which cradled the DNA.

“When we modeled normal undamaged DNA into the structure, we found that the groove can accommodate it very nicely,” he said. “What we know about damaged DNA is that it is severely distorted in many different ways, so damaged DNA couldn’t fit into this new structure.”

“We believe the ‘open’ form is the sensor, because it can read all forms of DNA, whether damaged or native,” he continued. “As the proteins change shape, the closed form can only accommodate native DNA, so when it encounters damage, it stops, and that’s the signal for repair.”

The challenge now, Jeruzalmi said, is to determine whether the relatively simple DNA repair system of bacteria can be translated into higher organisms or even into humans, who have a similar, though vastly more complicated, system of proteins. Though it may be years before that system is understood, Jeruzalmi believes this work will serve as a foundation for understanding how DNA repair systems work in any number of organisms.

“There’s no question this is the foundation,” he said. “We don’t know how big the building is going to be, but this is the foundation. This is the sort of structural biology that I love, because we learned something that we did not know was actually there. Often, seeing a 3-D structure or image confirms everything you already knew, and that’s fine, but what is really exciting is when you learn something new and unexpected; here we discovered an answer to a question we did not even know to ask.”