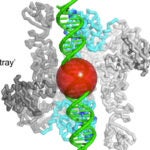 The research is particularly noteworthy, Mallet said, because it settles a decade-long controversy about whether the moths are a good example of natural selection at work.

Though the moths are typically a mottled black-and-white color, scientists in England at the time of Queen Victoria began seeing increased numbers of all-black moths following the start of the Industrial Revolution. Studies later showed that the moths had benefited from the black color because they were better able to camouflage themselves against the trunks of soot-stained trees. Later research also showed that, as air quality improved, the moths’ evolution reversed course, and the number of black insects fell dramatically.

Despite decades of research that showed the moths evolved in response to their environment, doubts began to surface in the late 1990s as some in the scientific community suggested that earlier studies weren’t very rigorous. Those criticisms were quickly picked up by creationists and intelligent design advocates, who used those doubts as evidence that natural selection itself was an incorrect explanation of the observed evolution.

With results showing that darker moths face, on average, approximately 10 percent more predation by birds than lighter moths, the new paper — the culmination of an exhaustive, six-year experiment conducted by the late Michael Majerus, a professor of genetics at the University of Cambridge — should ultimately settle those doubts, Mallet said.

“[The higher predation rate] shows a biased predation pressure against the melanic [darker] variety,” Mallet said. “The birds simply didn’t see the other moths as often because they blend in extremely well. That means natural selection is favoring the lighter-colored moths. When the trees were covered in soot, the light-colored moths were selected against. Now, on lighter trees, it’s the dark moths that are selected against.”

As one of the first researchers to raise questions about earlier peppered moth studies, Majerus had meticulously designed and conducted the years-long experiment, but died before he was able to publish his findings.

The massive study began with annual measurements of the moth population in a wooded area near Cambridge University. Based on those results, Majerus then released light and dark moths in a ratio that exactly matched that found in nature, Mallet said.

Beginning several hours before dawn, moths were randomly released in a series of spots — such as on tree trunks, where large branches met the trunk, or on limbs — where they typically rest during the day. Once the insects settled into position, Majerus spent two hours observing the area and recording whether the moths stayed in place or disappeared, having been eaten by birds. Based on those observations, he was able to conclude that the darker moths face a greater rate of predation against today’s clean bark.

“We felt this research was incredibly important so we analyzed the data he had gathered, and wrote it up for publication,” Mallet said. “This was one of the largest experiments ever conducted on natural selection. It convincingly shows that the peppered moth is one of the best-understood examples of how natural selection can cause rapid evolution.”

The paper was published Feb. 8 in the Royal Society’s Biology Letters journal.