Designing in the human context 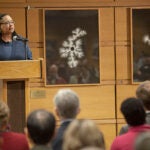 The ‘diversity problem’ in science

That particular Monday morning began with a deceptively simple direction: “Focus on one person, and stay in a straight line with them, while remaining within the bounds of the circle.”

A frenzy of movement and laughter ensued, and each iteration of this team-building activity ended in a comical confrontation between two people — just as likely roommates as a professor-student pair. More than just an icebreaker, though, the scene was a primer in human dynamics: a first lesson in engineering design.

For a week in January, 40 students from a variety of backgrounds — comparative literature to computer science — engaged in a “design thinking” workshop led by IDEO, an internationally renowned design consulting firm. Throughout, the human element was key — How do people actually use a product? — as was a certain amount of ad-libbed fun.

By midweek, the second-floor conference room of Maxwell Dworkin looked as though it had been hit by a tornado. Sticky notes covered the walls and dry erase boards, scattered with phrases, concepts, and ideas: “Huge!,” “Turtle backpack,” “Imagination pod,” “Mentor program,” “Kung fu video,” and more. Glue guns, markers, and poster board littered the floor; spaghetti and tape spilled into the adjacent lounge.

The course, “jDesign,” was among many programs available to students during Optional Winter Activities Week, the jam-packed conclusion to Winter Break at the Harvard School of Engineering and Applied Sciences (SEAS).

“Design is about making decisions, often in the face of uncertainty.”

“JDesign” was spearheaded by Gu-Yeon Wei, Gordon McKay Professor of Electrical Engineering and associate dean for academic programs at SEAS, with support from Joseph Zinter, a former design preceptor at SEAS (now at Yale University).

“Design is about making decisions, often in the face of uncertainty,” Zinter said. “It’s like running a race where the course keeps splitting. Each fork is a decision.”

Students were assigned to seven groups and asked to create and present a “starter kit” for a person with some goal. One group decided to make a toolbox for a high school graduate transitioning to college; another designed items that the homeless of Harvard Square could use to stay warm during harsh winters.

Throughout the design process, each team was urged to consider human factors; one team devised a lovable stuffed turtle to help an overwhelmed sophomore select a concentration at Harvard.

Intertwined with formal presentations by IDEO on topics such as human-centered design and visual thinking were brainstorming sessions, role-playing games, construction projects, and man-on-the-street interviews.

Siyabulela Xuza ’12, a South African student who participated in the course, noted the impact that the workshops had on him as an aspiring engineer.

“Academically, it’s given me a paradigm shift,” he said. “I’ve been given tools to know how to approach problems by considering human factors — putting humans at the center, and also really asking myself questions about the day-to-day things that we do.”

“I came in here thinking that I knew how to design on the world, imposing solutions,” Xuza added, “but learning about humans throughout the design process taught me how to design in the world.”

Emi Nietfeld ’15, a freshman with an artistic background, particularly enjoyed the opportunity to program using Arduino, a hardware-software combination designed for people at all skill levels.

“It was awesome to see that there’s this whole world out there just meant to empower people to build stuff,” she said. “I really like that we had ideas and made them right away.”

The workshop was led by David Goligorsky and other IDEO employees and facilitated by graduate students from SEAS and the Harvard Graduate School of Design (GSD). The faculty and facilitators integrated seamlessly into the design teams, learning just as much from their energetic teammates as they contributed in expertise.

Wei hopes that the inaugural workshop will continue to inspire “channeled innovation” in the students who participated.

“I was really impressed by the creativity and the energy,” he said. “Everyone evolved throughout the week from what they thought they were going to work on, on day one, to what they actually ended up working on and presenting on day five. I’m hoping we can all take what we learned throughout this week and apply it to what we do, whether it be research, whether it be courses, [or] continuing on to design new projects.”

The workshop pushed beyond the traditional perception of engineering as a math-centric, technical domain, emphasizing that effective engineering design is informed by (and resides within) the context of the humanities and social sciences.

“For an engineering program, jDesign was pretty progressive,” said Zinter. “SEAS is pushing hard against the conventional engineering paradigm, and that’s pretty rad.”

The course was supported by the Harvard President’s January Innovation Fund for Faculty.