Deciding to go left or right 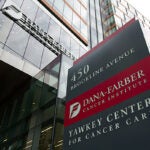 Researchers use device to determine that lower animals can navigate too

For decades, scientists have associated binary decision making — opting to go left or right — with higher-ranking animals, including humans. A team of Harvard researchers, however, is rewriting that assumption with research showing that the lowly fruit fly maggot is capable of making the same choices.

As described in a recent paper in the journal Nature Methods, the research is aimed at answering one of the most fundamental, long-standing questions about how the brain gives rise to behaviors.

“What we have shown is that the larvae really make left- and right-steering decisions based on sensory input,” said Aravinthan Samuel, professor of physics and co-author of the paper. “We now believe we have a complete algorithmic picture of how those decisions are made, based on the ways in which motor activity is regulated by these inputs. We know smells cause the animal to initiate a navigational decision. And once that navigational decision starts, we know how it’s carried out.”

At the heart of the work was an unusual piece of technology, the Linear and Dynamic Gaseous Gradient Apparatus — or LADY GAGA for short — that allowed researchers to precisely control odors in the air.

“This was the most challenging stimulus-control system we’ve ever built,” Samuel said of the device. “It works by pushing air across a plate to create a very slight breeze — approximately one centimeter per second — while a series of switches injects scents into the airflow.”

Using a computer program to control precisely when, where, and how much scent is injected enables the device to produce a perfectly linear gradient of odor across the plate. At one end, Samuel said, the scent is absent, while it is unavoidable at the other. Unlike similar experiments, which typically used a droplet of an odor-producing chemical, the breeze prevents the odor from diffusing throughout the device. As long as it is renewed by the injector, the scent effectively stays put.

“The problem with earlier experiments is that when you put a scent on one side of the plate, you can’t keep it there,” said Marc Gershow, a postdoctoral fellow in physics and designer of the device. “Over time, it will diffuse.”

In addition to LADY GAGA, Samuel and his team relied on another oddly named piece of technology to unlock navigational behavior, the MAGAT analyzer.

Short for Multiple Animal Gait and Trajectory Analyzer, the technology is a software package that uses a high-resolution camera to track dozens of larvae as they move in reaction to stimuli. Once placed on the plate inside LADY GAGA, the analyzer showed that larvae sweep their heads to the left and right to sample the environment, then made a decision on which way to move based on the input they receive.

Using that data, Samuel said, the next step is to understand “how that algorithm is written in the wiring diagram of the brain.”

Doing so will require another device with a celebrity namesake, CoLBeRT — short for Controlling Locomotion and Behavior in Real Time — a tracking microscope that allows researchers to track individual larva and stimulate specific neurons using pulses of laser light.

“The nice thing about the larva is that it’s optically transparent,” Samuel said. “It also has a small brain, with less than 10,000 neurons, so we should be able to map all the processing of odor information to the increased or decreased activity of a specific circuit in the brain.

“Once we figure out what that circuit is, we can determine how the patterns of activity in that circuit correlate with observable behavior. Using CoLBeRT, we may also be able to ‘push’ the activation into a neuron, even in the absence of a sensory input, and get the animal to behave as if the input was actually there.”

The larvae may seem relatively simple creatures, but Samuel believes that studying them will ultimately uncover the general principles for how the nervous systems of higher animals work.

“If there are general principles for understanding how an entire nervous system orchestrates itself to do purposeful things, those principles will be ferreted out with simple organisms,” he said. “And if that’s true, maybe we don’t give these little organisms enough credit.”