Circumstances that color our perception 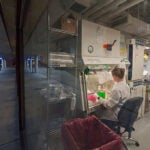 Funding success, and finding it

Dozens of Harvard faculty and students gathered at Emerson Hall on Feb. 23 to ponder the nature of perception with Ned Block, the Silver Professor of Philosophy, Psychology and Neural Science at New York University (NYU) and one of the country’s leading thinkers on consciousness.

Block’s lecture, “How Empirical Facts About Attention Transform Traditional Philosophical Debates About the Nature of Perception,” explored prevailing notions of perception by looking at how we see and pay attention to objects we encounter. As the title indicated, the lecture was peppered with evidence from experiments, some of which he asked members of the audience to try themselves.

The address also marked the resurrection of the William James Lectures, a long-running series of talks in the 20th century that featured such well-known intellectuals as Bertrand Russell and John Dewey. Discontinued in the 1980s, the series has now been revived by Harvard’s Department of Philosophy.

Block appropriately began his lecture with a quote on the nature of attention from the renowned Harvard philosopher and psychologist after whom the series is named.

“As we rightly perceive and name the same color under various lights, the same sound at various distances,” wrote William James in “The Principles of Psychology” (1890), “so we seem to make an analogous sort of allowance for the varying amounts of attention with which objects are viewed. And whatever changes of feeling the attention may bring, we charge, as it were, to the attention’s account, and still perceive and conceive of the object as the same.”

Block said that James’ understanding of perception was, in some ways, a precursor of Block’s own view, which he called “mental paint.” He explained that this notion of consciousness emphasizes the ways in which one is aware of things, rather than whether the things are themselves representations of our own inner worlds or objectively perceived. In other words, the color red that you see may or may not be the color red that I see, depending on the circumstances of perception.

Block contrasted mental paint with the idea of perception forwarded by the direct realists. These thinkers, he said, contend that the objects we see are the product of “direct awareness.” In other words, the red you see really is the red I see. Moreover, a direct realist would say that there is no such thing as an illusion. To illustrate this point, Block showed the audience a picture of a pencil partially immersed in water. For a direct realist, Block said, even the light refraction that makes the pencil looks bent is not an illusion, because our association is to something real.

“What you’re aware of is the similarity between the pencil in the water and a bent pencil,” he said. “What’s illusory is just the cognition to the effect that the pencil is bent. There’s no illusion in the perception.” Block said that this distinction amounted to little more than semantics. At some level, the viewer must still decide what is real and what is an illusion when he or she looks at the pencil in the glass, which undermines claims of a one-size-fits-all perception.

Block also took on the idea of perception advanced by representationalists, philosophers who claim that what we see is a representation of our own unique inner reality. In this view, the red you see is not the red I see. The color you perceive is determined by the idea that you have in your mind, not by any objective quality of the object itself.

To help the crowd at Emerson understand the mental-paint approach to consciousness, Block recreated an experiment first carried out by his colleague Marisa Carrasco, professor of psychology and neural science at NYU. On a screen at the head of the classroom, he projected an image with three aspects. In the middle was a dot. On either side of the dot were identical images of differing contrast. The image on the left was a 22 percent contrast patch. The image on the right was 28 percent.

Block asked the audience members to aim their gaze at the dot in the middle of the screen, but to attend to the image on the left. When they did, the members of the crowd discovered that the low-contrast patch looked identical to the high-contrast one. In other words, the way you pay attention to an object determines how you experience it. Perception is therefore neither objective and unchanging, as the direct realists content, nor entirely a product of inner experience, as the representationalists contend.

“There is a third way to think about perception,” he said. “Experience and experiment can influence the way we understand how we see.”

Block’s talk was well-received by the audience, and yielded to a vigorous question-and-answer session. Many in the standing-room-only crowd likely will return to Emerson 305 for the final three lectures in the series, “Rich Perception, Sparse Cognition” (March 1), “Unconscious vs. Preconscious” (March 8), and “Is Conscious Perception More Fine Grained than Attention and Perceptual Belief?” (March 20).