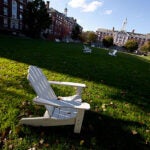 A look inside: Radcliffe Quad

Lippert set to score 1,000th point, but focuses on volunteering too

In a refreshing twist, atypical of many Harvard students, Victoria Lippert doesn’t have a plan for what to do after graduation. “I don’t know,” she shrugs. “I’ve been exploring that a lot lately, thinking about possibilities.”

But the junior history and science concentrator isn’t the least bit worried. There’s her soon-to-be historic basketball career with the Crimson in which she’s poised to surpass the 1,000-point mark in one of her upcoming games — a feat that Lippert was blithely unaware of. But in reaching that goal, she’ll be only the sixth underclassmen and 16th player overall to reach 1,000 points. “It’s kind of cool,” Lippert says.

Lippert, who left sunny San Diego three years ago to take up residence in chilly Cambridge, “hasn’t looked back since.”

“I love Harvard,” she says. “And the snow was marvelous the first time I saw it.”

When not racking up baskets as a forward for the Crimson, the down-to-earth Lippert is involved with the campus Christian group Athletes in Action. In the summer of 2010 she traveled with the organization to Pretoria, South Africa, where for a month the athletes worked to create a tutoring program at a local school.

“It was a humbling experience, seeing the conditions there, listening to the kids’ stories, and knowing they have to deal with so much — disease, AIDS, poverty,” she recalls. “I grew a lot from that trip; it was a really powerful experience.”

As the Crimson head into the final games of their season, Lippert’s versatility and scoring touch will be critical to their success. “We really want an Ivy League championship this year,” she says. “This group of girls is very special. We have amazing chemistry off the court, which really helps us on the court. Right now, we’re trying to bring consistency to the competition. Anything can happen on any given night. We have to have our game faces on.”

“Vic is exceptional in many regards, both on and off the floor. First, she is an extremely talented, versatile player, who has a passion for the game that is contagious,” says Crimson coach Kathy Delaney-Smith. “And one of her most remarkable qualities is her unselfishness and will to win. Even though she’s a tremendous scorer in many ways, she puts the team first. She’ll do whatever it takes for the team to win.”

And this determination will certainly aid her in whatever career path she chooses, too. There is, of course, the possibility of playing basketball overseas, but Lippert is considering an option closer to home, too.

“I wrote a paper on the history of fingerprinting, and it got me thinking about crime and crime-fighting technology,” she says. “I’m considering something in law enforcement or the intelligence community. But I’m just poking around right now.”

There’s plenty of time to figure all that out, of course. “I’m not afraid of change or adventure,” Lippert says. “I’m generally pretty adaptable. I like exciting, new possibilities.”