Aiming for both diversity, success 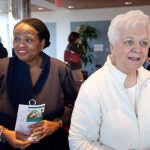 By Robert P. Mitchell Faculty of Arts and Sciences Communications

Masami Nakagawa thinks the team leader of the American company she works for is victimizing her because she is Japanese.  “Westernize or go back to Japan,” is her perception of how she is viewed.

Grant Webster, a member of the same corporate team, believes he is being victimized because he is African American.  “If I say something with the same tone as the white guy,” he says, “I am accused of being ‘aggressive, edgy, having an attitude,’ all code for being too black.”

And team leader Michael Lantry remains a closeted gay man because he comes from a closeted generation, and does not think his company would be very open to his lifestyle.

Masami, Grant, and Michael are all characters in a provocative role-playing presentation called “Inclusive Leadership: Managing Successful Teams,” a CWS Associates program designed to bring attention to workplace inequities, stereotypes, discrimination, and unconscious bias.  The “drama-based, interactive” event, held in December, was the second in a series of diversity dialogues organized by the Faculty of Arts and Sciences’ human resources department.

In opening remarks, Evelynn M. Hammonds, dean of Harvard College and Barbara Gutmann Rosenkrantz Professor of the History of Science and of African and African American Studies, said, “Harvard is more diverse than it has ever been in its 375 years.  The world is here on campus.  We must come to terms with the issues that diversity brings, and an inclusive and diverse community is the only kind to have in order to do our best work.  This means we may have to work outside our comfort zone sometimes, and there may be times when we have to stretch, but that’s a good thing.”

“Having conversations like the one led by Connie Wong is one part of our FAS diversity plan that includes recruiting and hiring people with diverse backgrounds and developing a supportive culture that helps them to succeed at Harvard,” said Chistine C. Ciotti, associate dean for human resources.

“To this end, our strategic plan is comprised of several different elements, including the Year Up and Administrative Fellows programs, focused diversity recruiting, and the FAS Staff Hiring Toolkit.  Our FAS Diversity Dialogues are an important part of our overall effort to create and nurture a truly diverse community.”

Back on stage, the character Masami was still feeling marginalized.  Team leader Michael only seemed to value her as a translator when communicating with important clients in Japan.  And group director Chris Quinones, a gay Latino man, would not grant her request to be a part of a team that will soon make a pitch to a prospective client.  “You need to be more confident,” he told her.

The role-playing presentation before more than 125 people from across the University, who had gathered in the Radcliffe Gym, was set up to stimulate audience interaction.

The actors represented a range of minorities: single, white woman; Japanese woman; a closeted gay, white man; an openly gay, Latino man; a heterosexual black man; and a heterosexual white man (the new minority?).  “This is not about ‘beat up on the white guys,’ ” Wong said.  “It’s about how people view themselves.  We must see beyond messages and see all that that person would want you to see.”

She chided institutions that prefer to hire from within.  “Preferences for hiring from within prevent us from succeeding at more diversity,” she said.  “There is a fear of going outside because we work so hard to make a place ‘unique.’ ”

The actors, always in character, confronted, questioned, and wondered about numerous issues related to diversity.  The character Phil Feathers, staunchly straight, secretly declared that he is “in the closet” because he does not want anyone to know he has a gay brother.  He also took exception to assumptions about white privilege.  He believed, for example, that he and other whites had been denied academic scholarships that were given to less-qualified minorities.

African-American character Grant Webster told the audience he gets stopped by police every time he enters Massachusetts.   Heterosexual Sarah Sullivan said she is “in the closet” because she is afraid to admit that one of her good friends is a lesbian because others might think that she is a lesbian too.  In the end, the audience, which was very much a part of the conversation, drew its own conclusions about the value of the staged performance.

“I found the presentations by the professional actors very engaging.  I’ve seen this kind of role-playing before, where the cards are stacked to make an obvious point,”  said Eric Engel, director of the Memorial Hall/Lowell Complex. “These actors created scenarios that were more layered and, therefore, more human.  Everybody was right, and everybody was wrong. I came away thinking about the strength potential in a diverse team.”

In the next diversity dialogue, “Blind Spot: The Hidden Biases of Good People,” Mahzarin Banaji, Richard Clarke Cabot Professor of Social Ethics in psychology and senior adviser to the FAS dean on faculty development, will present a provocative workshop focused on new evidence about a blind spot that keeps leaders from selecting and retaining the best talent and making decisions that are in the best interest of their organizations.