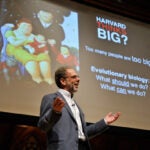 Ideas to improve the everyday

Partnership of Harvard, others results in 25 units staying on rental market

Representatives from the state, Harvard University, and the city of Cambridge joined with elected officials, affordable-housing advocates, and local residents on Feb. 8 to celebrate preserving the affordability of 25 homes in Chapman Arms Apartments in Harvard Square.

The success resulted from a partnership between the city and Harvard, since the University holds the ground lease for the building, and the agreement was the first implementation of the state’s new preservation statute, Chapter 40 T.

“The accomplishment of preserving affordable units in the heart of Harvard Square is such a tribute to the commitment of the Cambridge City Council,” said Bob Healy, city manager, who is also the managing trustee of the Cambridge Affordable Housing Trust and has worked to strengthen affordable housing during his 30 years with the city. “It’s also important to remember all that Harvard has done in partnership with the city of Cambridge in the area of affordable housing.”

“This is what it means to preserve homes, and it’s not just preserving where people sleep at night, but how they live their lives,” said Marjorie Decker, the Cambridge city counselor who received word last spring that the apartments were in jeopardy. The officials had gathered for the celebration in a crowded room at the Harvard Kennedy School.

Last April, residents of Chapman Arms, which is also known as Craigie Arms, grew concerned when their apartment building of 25 affordable units was put up for sale. With affordability restrictions on the units scheduled to expire in 2016, the units were an attractive investment for buyers interested in converting them to market-rate housing.

Working together, the city, Harvard, and the nonprofit Homeowner’s Rehab Inc. (HRI) were able to orchestrate HRI’s purchase of the building to ensure affordability of the 25 units for a minimum of 50 years. Harvard amended and extended its ground lease on the property in a manner that allowed HRI to secure the necessary financing from the Cambridge Affordable Housing Trust and the Community Economic Development Assistance Corporation (CEDAC). HRI purchased the building in a preservation transaction that was finalized on Dec. 19.

Chapman Arms was the first preservation acquisition to utilize Chapter 40T, the state’s new innovative expiring-use law that was pushed through by housing advocates and elected officials, including Rep. Kevin Honan of Allston-Brighton and longtime Rep. Alice Wolf of Cambridge, who spearheaded passing the legislation.

Healy noted Harvard’s long history of supporting affordable housing in Cambridge, from the sale in the 1990s of 100 units to the city for the below-market rate of $32,000 each, to the creation of the 20/20/2000 program, a $20 million, 20-year, low-interest, revolving loan program that has helped to create 465 affordable units in Cambridge. He also acknowledged Harvard’s involvement in the effort, as holder of the ground lease on the property, which allowed the deal to come together.

“It’s always nice to thank your host, but they deserve it,” said Healy. “They really have been a key player in the support of affordable housing in Cambridge for a very long time.”

Lisa Hogarty, Harvard’s vice president for campus services, lauded the town-gown partnership, saying, “The city of Cambridge and Harvard have enjoyed a long and successful track record of working together to address the quality of life in the city. By any measure, Chapman Arms is an affordable-housing success story.”

For Chapman Arms resident Linda Jordon, the success story is personal, since “This means 25 people will have a home.”