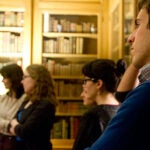 To open a recent discussion on one of jazz’s all-time greats, John Coltrane, and his famous album “A Love Supreme,” Homi Bhabha invoked the name of another celebrated saxophonist, one with Harvard roots.

When Joshua Redman ’91 was asked to name the one session in jazz history he most would have liked to have attended, Bhabha recounted, Redman said, “I would have to say being there for the recording of ‘A Love Supreme.’ … That’s my favorite jazz record of all time.”

Whether Ingrid Monson’s listeners were novices or seasoned jazz fans, she offered them a new way of approaching the seminal work in Sever Hall during a discussion on Monday. In a session interspersed with clips of Coltrane’s signature sound, the Quincy Jones Professor of African-American Music examined in detail what many observers consider the greatest jazz album of all time.

Monson’s talk was part of an ongoing series of master classes sponsored by Harvard’s Mahindra Humanities Center. The lectures aim to showcase Harvard scholars engaged in the essential practice of  “interpreting a single work with scrupulous care and patience,” said Bhabha, the center’s director and Anne F. Rothenberg Professor of the Humanities, during his opening remarks.

Sampling sections of the album’s four movements, Monson carefully deconstructed some of its underlying themes, its improvisational style, and the nature of the dynamic relationship between Coltrane and his fellow musicians, including bassist Jimmy Garrison, drummer Elvin Jones, and pianist McCoy Tyner.

Coltrane, Monson said, arrived at the recording session with an overall plan for a four-part work that was skeletal at best. He simply brought a mapped-out sequence of keys and tempos, and let the seasoned quartet do the rest.

“He gave the musicians some chord progressions for parts of the work, and some general instructions. But they knew that these were simply guidelines, for they had been playing together as a group for nearly three years,” said Monson. “They knew in the end they would be following what Coltrane did, and each other.”

In an unusual move for Coltrane, one that added to the album’s fluid sound, “A Love Supreme” was completed in one four-hour session. The recording took place in Englewood Cliffs, N.J., in a studio with cathedral ceilings and an engineer famous for his precision, the white gloves he donned to handle the studio’s microphones, and his ability to “get a very original sound.” The players arrived at 8 p.m., said Monson, and worked until midnight, with the lights turned down low to help establish the mood.

That mood, she said, was spiritual.

Included in the album’s liner notes is a letter penned by Coltrane to his listeners. In it, he discusses his own spiritual awakening in 1957 and his desire to help make others “happy through music.

“I feel this has been granted,” he wrote, “through His grace.”

But for Coltrane, who had studied various religions, including Christianity, Hinduism, and Islam, the spiritual nature of the work was connected to “a pan-religious sensibility rather than one linked to a particular belief system,” said Monson.

The liner notes also included a copy of Coltrane’s devotional poem titled “Psalm,” the same name as the piece’s final movement. Only years after the album’s release did scholars discern a direct connection between that final section of the music and the text. Coltrane, they realized, was essentially “singing” the words with his instrument.

“This is what he meant by a musical narration of the theme,” said Monson, as she played the piece and followed the text displayed on a screen at the head of the room with a pointer. “He literally intones the full text … that is the form of ‘Psalm.’ ”

Monson acknowledged that initial reaction to the album was mixed. Some critics found it “rambling,” some called it “embarrassingly open,” and others thought it was the “epitome of black artistic self-determinism.”

Yet almost 50 years later, its position as a jazz masterpiece is secure.

“The musical give-and-take you hear on this album,” she said, “is surely among the most admired in all of jazz.”