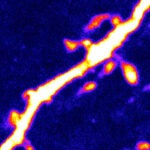 For swimmers looking to gain an edge on their competition, the notion that simply donning a high-tech swimsuit — the surface of which was inspired by shark skin — could lead to a first-place finish is powerful.

Experiments conducted in Lauder’s lab and described in the Feb. 9 issue of the Journal of Experimental Biology reveal that, while sharks’ sandpaperlike skin does allow the animals to swim faster and more efficiently, the surface of swimsuits such as the Speedo Fastskin II has no effect when it comes to reducing drag as swimmers move through the water.

“In fact, it’s nothing like shark skin at all,” Lauder said of such swimsuit material. “What we have shown conclusively is that the surface properties themselves, which the manufacturer has in the past claimed to be biomimetic, don’t do anything for propulsion.”

That’s not to say that the suits as a whole do nothing to improve performance.

“There are all sorts of effects at work that aren’t due to the surface,” Lauder said. “Swimmers who wear these suits are squeezed into them extremely tightly, so they are very streamlined. They’re so tight they could actually change your circulation and increase the venous return to the body, and they are tailored to make it easier to maintain proper posture even when tired. I’m convinced they work, but it’s not because of the surface.”

By comparison, Lauder said, the research showed that the millions of denticles — tiny, toothlike structures — that make up shark skin have a dramatic effect on how the animals swim by both reducing drag and increasing thrust.

“What we found is that as the shark skin membrane moves, there is a separation of flow. The denticles create a low-pressure zone, called a leading-edge vortex, as the water moves over the skin,” he said. “You can imagine this low-pressure area as sucking you forward. The denticles enhance this leading-edge vortex. So my hypothesis is that these structures that make up shark skin reduce drag, but I also believe them to be thrust-enhancing.”

Importantly, however, the phenomenon was only found when the skin was attached to a flexible membrane. When placed on a rigid structure, no increases in swimming speed were seen.

“In life, sharks are very flexible. Even hammerheads and large ocean sharks are quite flexible,” Lauder said. “If you watch a shark swim, the head does not move very much, so it could be that the denticles on the head are mostly reducing drag, but those on the tail are enhancing thrust. But we don’t know what that balance may be. Ultimately, though, one of the key messages of this paper is that shark skin needs to be studied when they’re moving, which hadn’t been done before.”

Studying how shark’s skin helps them move through the water, however, is no easy proposition, and one that, for obvious reasons, can’t be done using live animals.

To perform the tests, Lauder and his team obtained samples of the skin of mako and porbeagle sharks and tested them alongside two other materials, the high-tech swimsuits and a material that featured tiny grooves, or “riblets,” which has been explored as a way to cut fuel consumption on aircraft and reduce drag on sailboats.

To conduct the tests, each of the materials was mounted on two forms, one a rigid, winglike structure and the other a flexible membrane. Each was then attached to a robotic arm mounted on a low-friction device suspended over a recirculating tank. To measure the speed at which the apparatus “swims,” researchers turned up the flow in the tank until the device returned to its starting point.

Understanding how water flowed over each material, however, was trickier.

To get at the problem, Lauder and his team relied on a technique called particle image velocimetry, which uses a laser to illuminate millions of reflective particles in the water. Using a high-speed camera that records at up to 1,000 frames per second, researchers can observe how the particles move and see where and when vortices form.

“I’ve thought for years that the literature on shark skin needed an upgrade,” Lauder said, explaining his motivation for the research. “Once we got going, I thought it would be fun to look at the Speedo materials, because we don’t have a lot of quantitative information on the effect of surface structure.

“Going forward, we want to try to image the flow as close to the surface as we can reasonably get,” he continued. “The other direction we are exploring is to make an artificial shark skin and then manipulate it — delete every other denticle, make them twice as large, or change the spacing — and see what effects that may have.”

Funding for the research was provided by the National Science Foundation.