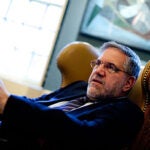 When Aun Em was growing up in Cambodia, she was told that if you look down, you can only see a few feet, but if you look up, the view is infinite.

Em, who is Harvard Medical School’s (HMS) IT help desk coordinator, has lived by the code of always looking forward. This has guided both her life and her career at Harvard. “You only look into the past to create a solution for the future,” she said.

Few of her Harvard colleagues were aware of her own past. They know her as an engaging, efficient technology specialist, the active co-chair of the local Joint Committee on the Status of Women (JCSW), a single mother of a 17-year-old daughter, and a passionate advocate of helping other women.

But in December she was asked to share her personal story with Harvard staff and faculty, and her illustrated lecture about survival under the ruthless Khmer Rouge regime moved listeners to tears.

She was born in August 1970 (her parents could not later recall the exact date) in Batdambang province in Cambodia, the youngest of 17 children; only seven survived into adulthood. Her parents were farmers. Theirs was a subsistence existence, worsened when her father was hit by a car and severely injured. In 1975, the Khmer Rouge, a fanatical Communist faction, took over Cambodia and set out to radically remake the country under leader Pol Pot’s warped vision of an agrarian society. More than 25 percent of the population would die under his rule.

Rural families were rounded up and questioned. The Khmer Rouge weeded out and executed anyone with an education. Em’s older brothers signed papers with their left hands to disguise the fact that they had gone to school.

The family was torn apart as the older children were assigned to labor groups; the older the child, the harder the labor. All were starved and punished for not producing. Em was able to stay with her mother, who convinced the Khmer Rouge leaders to let her set up a silkworm-breeding program and bring back some of her children.

After invading Vietnamese soldiers ejected Pol Pot in 1978, surviving family members returned to their village, only to find it in ruins. They made the desperate decision to leave Cambodia, urged on by messages from one brother who had found his way to Thailand. They narrowly escaped execution by the remaining Khmer Rouge, and they traveled by night through jungles and over mountains, avoiding land mines, toward the border.

“One night when we were so exhausted, we needed to rest, we needed fluid,” Em said. “We found a big puddle, and we all pretty much lay there. The next morning, when we woke up, we ended up seeing dead bodies in that big puddle. We didn’t want to, but we had to drink water from that pool of dead bodies. When you’re in starvation mode, you do anything to survive.”

“We were lucky to make it to the Thai border,” Em said.

From a Thai refugee camp, the family was brought in 1982 to New York state under church sponsorships. “It was challenging for us, but we knew we were not in fear of being taken away,” Em said. “We were happy to be in America. We needed to learn how to adapt.”

After graduating from high school, however, Em was forced to accept an arranged marriage and moved to the Boston area. The marriage was not a good one, and 10 months after her daughter was born, the couple split up.  In defiance of Cambodian tradition, Em wanted to continue her education, and she did, first getting an accounting degree. Later, while working two jobs, she was awarded a Microsoft System Engineer Certification from Clark University. In 2002, she was hired by HMS to manage the IT help desk group, a position that must constantly reinvent itself as technology progresses.

Her position matches her “core essence.” That is, “I really want to be able to learn and teach at the same time, because having an education was suppressed back at home. I want to see women advance. I want to be a good role model for my daughter, to really understand how important it is to have this freedom and to use it wisely.”

Em keeps looking up into the infinite sky: She has supported programs that educate girls in Cambodia, and she speaks passionately about her work with JCSW.

“My personal journey to America was about survival and perseverance, and my journey at Harvard is to enhance the sense of community, culture, and providing opportunities through JCSW for other women to advance in their careers,” she said.