The Civil War’s allures, and horrors 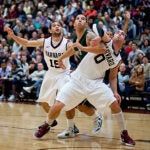 Faust reflects on her work as historian, kicking off library lecture series

In 1962, Drew Faust, then a girl growing up in Virginia, found herself “crowded into our aunt and uncle’s station wagon and headed off to war.”

The occasion, though, was a happy one: the centennial re-enactment of the Civil War Battle of Antietam, a turning point for the Union Army that is perhaps better remembered as the single bloodiest day in America’s history. The anniversary events that day were designed not to foster solemn remembrance of those 3,600 deaths, but to be “a spectacle that would remind us of the courage and the sacrifice that we had been taught to revere since we were very small.

“This was a carnival without carnage, a battle that was stripped of content and context,” Faust told a packed house at the Cambridge Public Library on Tuesday.

The re-enactment was a formative moment for the young Faust, who would go on to become Harvard’s Lincoln Professor of History and its first female president, as well as the author of six books, including “This Republic of Suffering: Death and the American Civil War.” The event demonstrated not just the inherent appeal of war — its promises of personal sacrifice and national glory — but the ways in which our histories of war are shaped by the politics of the present.

In her lecture, “Telling War Stories: Reflections of a Civil War Historian,” Faust explored the meanings the Civil War holds today, what its history says about modern conflicts, and what role historians and other writers can play in uncovering the deeper truths of warfare.

The talk kicked off the John Harvard Book Celebration, a recently announced program that will commemorate Harvard’s 375th anniversary, as well as its ties to its Cambridge and Boston neighbors. Over the next several months, prominent Harvard faculty and others will speak at library branches in both cities. Other faculty, staff, and students will fan out across smaller branches to host community events.

Harvard also will donate 400 books to the two library systems, an act that mirrors John Harvard’s own gift of 400 books to the fledgling university that would later bear his name. The partnership is fitting, said Susan Flannery, Cambridge’s director of libraries, since Harvard and the public libraries share the aim of “fostering learning over a lifetime.”

One could simply study the Civil War for a lifetime and continue to find new meaning in the conflict, as Faust and other historians have done.

“We remember a very different Civil War from the one we celebrated and contested in the 1960s,” Faust told the audience. The war’s legacy was hotly disputed during the centennial, as contemporary debates over civil rights and racial equality put the role of slavery in the conflict into sharp relief. Civil rights leader Martin Luther King Jr. even invoked President Abraham Lincoln’s words in his “I Have a Dream” speech, Faust noted.

If the capacity crowd at the lecture was any indication, the public continues to find the Civil War as fascinating — and confounding — as ever. In the five decades since the centennial, scholars have published books on the Civil War at the rate of 100 a year, according to Faust. Still, “The conflict over its interpretation continues, once again mirroring our contemporary debates over national purposes.”

That very night, Republican candidates were vying for victory in the New Hampshire presidential primary after campaigning on issues that echo some of those debated during the Civil War, she said. Rep. Ron Paul decries the federal government’s growing power, just as antebellum Southerners once did, while Gov. Rick Perry once suggested secession for his home state of Texas.

“As we come in time to see ourselves differently, we will ask different questions of our past,” and the fresh answers will change our perceptions of ourselves, Faust said.

She touched on the similarities of war and literature (a topic that formed the subject of her 2011 Jefferson Lecture in the Humanities), noting that both thrive on a narrative. What elevates war above random violence is our expectation that such conflicts have a meaningful beginning and progress toward an ending of victory or defeat. In truth, Faust said, war is chaotic, its truths hard if not impossible to define.

“We write about war because it is so hard to write about war, because its contradictions demand attention, if not resolution,” Faust said. “We seek the order that narrative promises to impose on the incoherence of conflict.”

In the aftermath of the attacks of Sept. 11, 2001, she noted, Americans replaced their fear of terrorism with the “efficacy” and national purpose of a named “war on terror.” Only by adopting the narrative of war could people assure themselves that terrorism could be eradicated.

Now, during the Civil War’s 150th anniversary and amid debates over U.S. engagements in the Middle East, people must remember the responsibility that rests on those who write the histories of wars, Faust urged.

“Human beings are in fact powerfully attracted to war,” she said. “As we continue to be lured by war, we must be committed to trying to tell the true story of its horrors.”

The next lecture, “Teaching About Values: Revisiting King’s Beloved Community,” will feature Harvard College Dean Evelynn M. Hammonds, the Barbara Gutmann Rosenkrantz Professor of the History of Science and of African and African American Studies. The lecture will be held Jan. 29 at 3 p.m. in the Cambridge Public Library, Central Square Branch, 45 Pearl St. See a complete schedule.