Sounds of the Silk Road 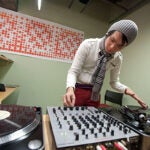 Arguably one of the most eclectic versions of “Happy Birthday” drifted through the Kirkland House Junior Common Room on Monday.

The offbeat rendering was no surprise given the diverse mix of musicians behind it, members of the Silk Road Ensemble, Yo-Yo Ma’s collective of artists that explores musical crossroads. In between performing new compositions for a packed house, the players serenaded one of their own, tabla player Sandeep Das, with the familiar song for his special day.

On the impromptu stage at the end of the wood-paneled hall were the string instruments typically associated with the classical repertoire, violins, a cello, a viola, and a bass. But there was also a kamancheh, a Persian bowed-string instrument, and a pipa, a four-stringed instrument from China, and a gaita, a Galician bagpipe, and the shakuhachi, a Japanese bamboo flute.

Made up of internationally renowned performers and composers from more than 20 countries, the ensemble was back in residency at Harvard during winter break as part of a five-year collaboration between Harvard and the project, a nonprofit inspired by the cultural traditions of the ancient Eurasian Silk Road trade routes that connected East with West.

For the next several years, the group will present a series of performances, workshops, and collaborations with local arts, cultural, and educational institutions.

During the week the ensemble worked on four new commissioned works, which they played for the evening concert, which was co-sponsored by Harvard’s Office for the Arts’ popular Learning From Performers program.

Addressing the audience before the show, violinist Colin Jacobsen said the week during which the musicians and composers worked in a “creative cauldron” was “amazing.”

So too was the input from Harvard students, he said.

“To have Harvard students reflect on what we were doing as we were doing it and give us their feedback was incredibly valuable for us.”

Composer Vijay Iyer created “Playlist for an Extreme Occasion,” a work that included a type of musical dialogue between the cello and the tabla — a pair of Indian drums — along with the use of the piano as a percussive instrument, and segments of improvisation.

In creating the work, Iyer said he tried to “think about how we experience music today, what is it for, and how does it function in our lives. … You can’t force meaning onto any musical situation, but you can at least open it up as a question.”

David Bruce composed the four-part work “Cut the Rug,” which included a frenetic final movement that he said “sort of raises the roof.” He said he was forced to rethink how to craft a work for musicians with such different approaches to the art form.

“I am used to writing everything down. … And knowing that there were some musicians who don’t come from traditions where that happens, it was quite hard for me to get my head around.

The evening also included the rhythmically challenging work “Mille Etoiles” by Glenn Kotche, percussionist for the alternative rock band Wilco. Inspired by a night camping in France under the stars and the birth dates of members of his family, the work is based on impossibly complex time signatures like 31/8.

A taped rehearsal would have been peppered with “four-letter words,” joked bass player Jeff Beecher. To prepare the piece, the musicians broke it down into sections, he said during a question-and-answer session with the audience, working slowly and prepping “for the inevitable.”

As part of the recent residency, the ensemble also took part in a Wintersession arts intensive titled “Knowing the Score: A Workshop in New Music Without Borders.” Throughout the week, ensemble members met with a small group of undergraduate and graduate students to help them develop independent projects based on the ensemble’s work.
Harvard participants included Graduate School of Design student Timothy Carey, who was interested in the collaborative process of music as opposed to that of design. Robert Moore, a student in the Graduate School of Education’s International Education program who has worked in Nepal to establish a national music curriculum, was also eager to see the group’s rehearsal and collaborative process. Freshman Stella Fiorenzoli, an aspiring composer, created a mini-composition for the group based on Tibetan and Indian folk tunes.

The intensive culminated in a final presentation of the projects, which included discussions and the performance of brief compositions.