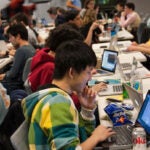 Koşar teaches aerodynamics from the cockpit

In 1934, a group of enterprising young Turks pooled their money and bought construction plans for a glider. Pioneers in the infancy of aviation, they built it by hand, out of wood and fabric, and when the time came for its maiden flight, they drew straws.

“My grandfather pulled the short stick, so he had to be the test pilot on that glider without much knowledge,” recalls T. Fettah Koşar, a principal scientist and facilities manager at Harvard’s Center for Nanoscale Systems. “He didn’t have a license — had been on planes, but I used to hear stories about how he was so nervous.”

“But he flew and landed without any trouble.”

That’s the story Koşar grew up with, first as an aspiring astronaut, then as a budding pilot, following in his grandfather’s footsteps. From the age of 5, he built model airplanes from balsa wood and read aviation magazines.

“I never got my license,” Koşar’s role model would tell him, at home in Turkey. “I hope one day you’ll be able to do that — to do what I couldn’t do.”

Today, in the United States, Koşar is a certified (licensed) pilot, sharing his passion for flight with the community around him, just as his grandfather did.

A course in flight takes off

January at Harvard is a time of intellectual excitement — of investment in personal interests and growth. In the weeks between semesters, students have the opportunity to participate in a vast range of optional workshops, mini-courses, field trips, training sessions, and seminars, all made possible by the passion and dedication of the University’s faculty and staff.

Koşar, with the support of the Center for Nanoscale Systems, arranged and taught a three-day mini-course on the fundamentals of aerodynamics. Offering far more than just a classroom introduction to the physics of flight, however, Koşar treated students to one-on-one time in the cockpit of a rented plane, high above the snowy, coastal landscape of northeastern Massachusetts.

“It was an amazing feeling to fly in a small plane where you can see what exactly is going on,” says Pakpong Chirarattananon, a graduate student in electrical engineering at Harvard School of Engineering and Applied Sciences (SEAS). Chirarattananon is a member of the Harvard Microrobotics Laboratory, where his research in control systems and robotics involves designing the flapping-wing mechanism of a micro-air vehicle.

“We were even given a chance to take control of the plane for a brief period,” Chirarattananon adds. “In the meantime, the exercise was a brilliant demonstration of results we expected to see according to physical laws.”

Before takeoff, the students taped strands of yarn onto the wings of the plane in order to visualize the airflow during a stall.

“It’s like free fall,” Koşar explains, lifting a model airplane in the classroom. “You reach the point where the wing is not generating enough lift, and it goes down like this” — he drops his hand — “and all those strings start to do chaotic things instead of being nicely aligned with the air flow.”

Several other in-flight exercises helped to bring theory to life. The students explored how the position of the wing flaps affected the stall speed and, with a kitchen scale, measured and calculated how the angle of a turn affected the G forces.

Koşar also showed his students the facilities where enthusiasts can build their own planes — not with wood, these days, but with aluminum and fiberglass.

“It was great fun,” says Matthias Lorenzen, a visiting graduate student in mechanical engineering at SEAS who went up in the plane. “It is a mixture of the feeling you have when you leave the ground and the great view that makes flying so interesting. Clouds suddenly become something three-dimensional; you can nearly touch them.”

A career in engineering, however, was not his only goal, and in 2000 he began his first training as a pilot.

“Flying over Seattle, over the sea, and seeing the mountains, it was really nice,” he recalls.

But aviation is not a cheap hobby, and the demands of Koşar’s continuing graduate studies forced him to postpone his dream. He graduated from the University of Washington in 2005 with a Ph.D. in bioengineering and nanotechnology, as well as a certificate in technology entrepreneurship — but still no pilot’s license.

In 2006, Koşar arrived at the Center for Nanoscale Systems, a research facility maintained by Harvard’s Faculty of Arts and Sciences and supported by the National Science Foundation. While working as a specialist in soft lithography, and later as manager of the Material Synthesis and Characterization Facility, he became eligible for tuition assistance (TAP) benefits.

That changed everything. Koşar enrolled in an online course in aerodynamics from Embry-Riddle Aeronautical University, immediately thinking, “I should offer this at Harvard.”

He restarted his flight training at Beverly Municipal Airport in Danvers, Mass., and in October 2011, he made his 98-year-old grandfather proud, finally earning his pilot’s certification.

For Koşar, it is just a hobby, but it’s also a passion. On the weekends, when he’s not flying to Nashua “for a $100 omelet,” he’s flying radio-controlled model planes in a park in Burlington, Mass., with other enthusiasts and kids.

And Koşar kindles that same excitement in his students, several of whom hope to become pilots.

“It has always been my dream to operate a real airplane,” says Xiao Guo, a graduate student in computer science at SEAS who took the January mini-course. “When I flew in the sky, I forgot all the pressure in my life and just focused on the flight.”