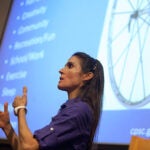 Perfluorinated compounds (PFCs), widely used in manufactured products such as non-stick cookware, waterproof clothing, and fast-food packaging, were associated with lowered immune response to vaccinations in children in research led by Philippe Grandjean of the Harvard School of Public Health (HSPH).

The study appears in the Jan. 25 issue of the Journal of the American Medical Association (JAMA).

“Routine childhood immunizations are a mainstay of modern disease prevention. The negative impact on childhood vaccinations from PFCs should be viewed as a potential threat to public health,” said Grandjean, adjunct professor of environmental health at HSPH and the report’s lead author.

PFCs have thousands of industrial and manufacturing uses. Most Americans have the chemical compounds in their bodies. Prior studies found that PFC concentrations in mice similar to those found in people suppressed immune response, but the adverse effects on people had been poorly documented.

The researchers analyzed data on children recruited at birth at National Hospital in Torshavn, Faroe Islands, 1999-2001. A total of 587 participated in follow-up examinations. Children were tested for immune response to tetanus and diphtheria vaccinations at ages 5 and 7 years. PFCs were measured in maternal pregnancy serum and in the serum of children at age 5 to determine prenatal and postnatal exposure.

“We were surprised by the steep negative associations, which suggest that PFCs may be more toxic to the immune system than current dioxin exposures,” said Grandjean.

The PFC concentrations were similar to or slightly below those reported in U.S. women, and most serum PFC levels in Faroese children at age 5 were lower than those measured in U.S. children aged 3 to 5 in 2001-2002.