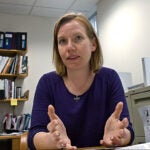 No boost from patches, gum in study of quitting success

Nicotine replacement therapies (NRT), specifically nicotine patches and nicotine gum, did not improve smokers’ chances of long-term cessation in a study by researchers at the Harvard School of Public Health (HSPH) and the University of Massachusetts Boston.

The study appears Jan. 9 in an online edition of Tobacco Control and will appear in a later print issue.

“What this study shows is the need for the Food and Drug Administration, which oversees regulation of both medications to help smokers quit and tobacco products, to approve only medications that have been proven to be effective in helping smokers quit in the long term and to lower nicotine in order to reduce the addictiveness of cigarettes,” said co-author Gregory Connolly, director of the Center for Global Tobacco Control at HSPH.

In the prospective cohort study, the researchers, including lead author Hillel Alpert, research scientist at HSPH, and co-author Lois Biener of the University of Massachusetts Boston’s Center for Survey Research, followed 787 adult smokers in Massachusetts who had recently quit smoking. The participants were surveyed over three time periods: 2001-2002, 2003-2004, and 2005-2006. Participants were asked whether they had used a nicotine replacement therapy in the form of the nicotine patch (placed on the skin), nicotine gum, nicotine inhaler, or nasal spray to help them quit, and if so, what was the longest period of time they had used the product continuously. They also were asked if they had joined a quit-smoking program or received help from a doctor, counselor, or other professional.

The results showed that, for each time period, almost one-third of recent quitters reported to have relapsed. The researchers found no difference in relapse rate among those who used NRT for more than six weeks, with or without professional counseling. No difference in quitting success with use of NRT was found for either heavy or light smokers.

“This study shows that using NRT is no more effective in helping people stop smoking cigarettes in the long term than trying to quit on one’s own,” Alpert said. He added that even though clinical trials have found NRT to be effective, the new findings demonstrate the importance of empirical studies regarding effectiveness when used in the general population.

Biener said that using public funds to provide NRT to the population at large is of questionable value, particularly when it reduces the amount of money available for smoking interventions shown in previous studies to be effective, such as media campaigns, promotion of no-smoking policies, and tobacco price increases.

Smoking cessation medications have been available over the counter since 1996, yet U.S. Centers for Disease Control and Prevention statistics show that the previous adult smoking rate decline and quitting rates have stalled in the past five years.

Funding for the study was provided by the National Cancer Institute, State and Community Tobacco Control Interventions Research Grant Program.