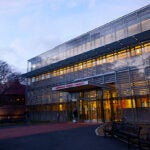 The Crimson to take on George Washington Jan. 14

The Harvard men’s basketball team play Monmouth tonight in a nonconference matchup at 7 p.m., hot on the heels of their win against Dartmouth in the Crimson’s Ivy League opener before a sold-out crowd at Lavietes Pavilion on Jan. 7. The team will next take on George Washington University in a sold-out game on Jan. 14.

Oliver McNally ’12 tallied a season-high 17 points against Dartmouth, draining three of four shots from beyond the arc, leading the No. 21/22 Harvard men’s basketball team to a 63-47 win.

The victory pushes Harvard’s overall record to 13-2 (1-0 Ivy), while Dartmouth slips to 3-13 (0-1). Harvard also extends its home win streak to 22. The Crimson hit eight of 20 treys on the day (.400) and held a 28-27 advantage on the boards. Kyle Casey ’13 added 10 points on three of four shooting and six boards, while Keith Wright ’12 contributed 10 points and five rebounds. Laurent Rivard ’14 buried three triples, finishing with nine points. Dartmouth had only one steal and no blocked shots, while the Crimson had three rejections and nine steals.

Read the full story on GoCrimson.com.